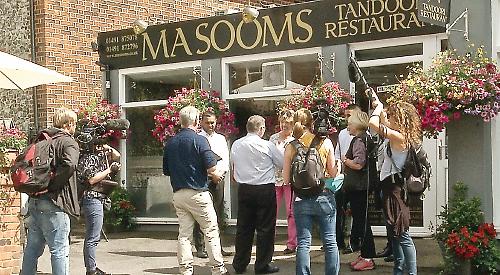 THE organisers of Goring’s Britain in Bloom entry are to appear on a television programme.

Stephanie Bridle and her volunteers from the Goring Gap in Bloom committee were filmed by two camera crews as they showed judges of the Royal Horticultural Society competition around the village on July 12.

The programme will be broadcast on BBC 2 next year.

As well as Goring, it will follow 14 other towns and villages across the country from the day of their judges’ visit to the awards ceremony in September, when the results are announced.

Goring, which competes jointly with Streatley, has entered the competition this year for the first time since 2015. It is the only place in the society’s Thames and Chilterns region which the TV crews visited.

The committee agreed to be filmed after being approached by the BBC’s production company.

Goring previously competed for four years from 2012, winning two gold awards and two silver gilts in the regional small town category, but pulled out last summer due to funding problems.

Now the committee hopes to match its previous successes after securing a £1,275 grant from Goring Parish Council plus additional funding from Great Western Railway and community groups including Goring Gap News and the Greenfingers gardening club.

Forty hanging baskets have been installed in the village centre while businesses at The Arcade, off High Street, have put up windowboxes and there are also a number of decorative troughs and planters.

Volunteers have also added plants to the wildflower meadow they created in the grounds of the BT telephone exchange off Station Road last year.

They have begun to tidy up the earth bank at Goring station’s eastern platform. They are using old railway sleepers to reinforce the soil and planting a mixture of flowers and low-growing shrubs and trees.

The pair visited the new gardening club at Goring Primary School, where pupils presented them with a selection of home-grown produce, and Withymead nature reserve on the outskirts of the village.

The committee also took the judges on a boat trip to give them a wider view of the Chilterns and North Wessex Downs Areas of Outstanding Natural Beauty.

Stephanie Bridle, who chairs Goring in Bloom, said: “It went as well as it could have done under the circumstances. Being filmed added an extra complication to our schedule but it was a lovely day and the crews kept as much of a distance as possible.

“It’s never 100 per cent perfect because you always spot the little things that could have been better but the village was looking pretty good.

“The children at the school were very enthusiastic and knowledgeable, which impressed the judges. There are also some new wardens at Withymead who are doing a wonderful job and the village centre looked wonderful.

“It was a real community effort that everybody got behind and we’re always grateful for people’s support.

“We’re really making an effort to tidy up the entrances to the village as that’s where people get their first impressions and I think we’re making good progress with that.

“Goring is a very strong tourist destination, especially since the death of George Michael, though it has always been very popular because it has access to some great walks.

“It’s really important that it’s looking its best, especially in the Wheel Orchard car park. We’re planting up some areas with climbing roses and honeysuckle, which looks much nicer than the weeds which were there before. We’ve also persuaded the owner of the neighbouring allotments to improve a particularly grotty spot, so it seems we’re taking over the village one small project at a time!

“The past few years have been a struggle at times but we now have a much higher profile in the village and almost everyone knows about and values our work. People now request advice from us on making their own land look nicer.

“I think people realise that it’s not just a horticultural or environmental competition.

“Those aspects are important, but just as crucially it’s a great way of bringing people together.

“We’ve never had Gareth as a judge before but we know him well as he regularly visits and is always offering advice and mentoring.

“Of course, on this occasion he was wearing his judge’s hat so we had to be on our best behaviour.

“The TV crews interviewed us and the panel afterwards, though they did it separately so we have no idea what they said.

“There was quite a bit of extra work for us because they also filmed our last-minute preparations the day beforehand but the process was very interesting.

“We were very proud to be a part of the programme, although now I’m a bit worried about how we might look when it goes out. Perhaps I’ll have to leave the country until it’s all over!

“All in all, the village looks great and I hope we can keep it that way until at least the autumn.

“I hope we will achieve another good result but the most important thing is that everyone took part with pride and enjoyed the experience.”