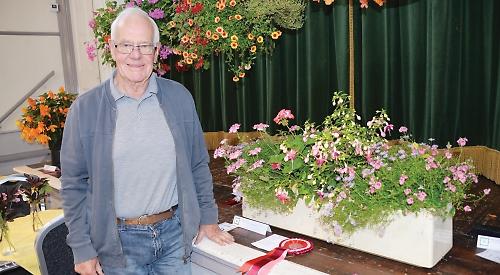 A FOUNDER member of Goring Greenfingers swept the board at the gardening club’s 23rd annual summer show for the second year running.

Jeanne Davis, a former villager who now lives in Preston Crowmarsh with her husband Rodney, took home eight of the 17 main trophies and certificates, including both “special class” cups for top tray and top vase and the Challenge Cup for most points in the flower section.

She was also awarded the Derek & Christie Entertainers Cup for most points in show after winning 13 of the 47 individual classes, including six in the flower section, two in vegetables, four in cookery and one for flower arranging.

Her husband won the certificate for best flowers and best exhibit in show plus four flower and two vegetable classes.

Last year, Mrs Davis won 23 titles while in 2012 she and her husband took home more than half of the available prizes between them. This year the couple won more than a third.

Another strong contender was show chairman David Woodage, of Elvendon Road, Goring, who took home 16 prizes, beating the 15 he won in 2013.

The 76-year-old won the Challenge Cup for fruit and vegetables, the Royal Horticultural Society’s Banksian Medal and the certificate for best vegetables in show with his five runner beans.

He won three flower classes and one each in fruit and cookery plus eight in vegetables, including two for potatoes.

Jim Thomas, who was the runner-up at this year’s Greenfingers spring show, won 10 awards, including the Goring Horticultural Society Plaque for photography and two individual photography classes for his entries, Up The Garden Wall and Gone But Not Forgotten.

Rosemary Brook, another new member, won four classes — single stem flower, cucumber, three peppers and strangest-looking vegetable, a kohlrabi that had been split in half.

There were 168 entries, slightly fewer than at last summer’s show, and 17 of the club’s 45 members took part.

The public could visit free of charge and there was a plant and jam sale and a tombola.

Mr Woodage said: “We were a bit worried because fewer members entered than usual but they submitted a lot of entries so it was almost as good as last year.

“The judges were very pleased with the quality of entries. We also had quite a few visits from people who’d come to Goring to see George Michael’s house, which still seems to be popular. They stopped and bought a few things at the stalls, which was nice.

“Jeanne and Rodney always do well but it’s well-deserved as they are talented, precise gardeners. They judge other competitions elsewhere so they know what we’re looking for.”

Challenge Cup for most points in flower section — Jeanne Davis

Pelargonium in a pot — Jenny Emerton

Dish of seven plums — no entries

Dish of any other fruit — David Woodage (damsons)

Three onions over 250g — no entries

Trug or other container of garden
produce — Christie Leary

One jar of chutney — Christie Leary

Up the Garden Wall — Jim Thomas

Gone but Not Forgotten — Jim Thomas