Future of food and drink festival in doubt despite success 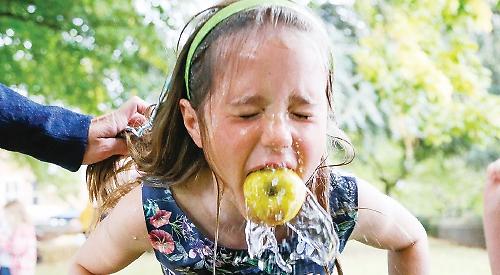 The event, which took place across both villages on September 9, was a success despite being hit by showers and a hailstorm.

There was a range of stalls selling hot food, snacks and alcoholic drinks including BumbleBee cider, which is produced by Goring couple Tim Schulz and James Dawe.

Stallholders were busy throughout the day and many had sold out of goods by the end.

There was a series of children’s activities in Rectory Garden, off Goring high street, including apple-bobbing, a coconut shy, egg and spoon races and spaghetti-eating contests. Youngsters could also take part in baking workshops. Other attractions included a face-painting stall and live music performances in a marquee.

Demonstrations were given by guest chefs including Christine Wallace, who appeared on the fourth series of The Great British Bake Off and is one of the festival organisers, and former MasterChef: The Professionals contestants Nick Bennett and Andrew Scott.

Non-profit bus operator Going Forward ran a park and ride service and there were boat rides into the village centre from the towpath between Goring and South Stoke.

Organiser and co-founder Shannon Lee Robinson, a professional photographer, said: “I’m very pleased with how it went. The stalls were very popular and brought a lot of people into the village. It’s a shame the chef demonstrations weren’t better attended, though. Those who did attend took a keen interest and the chefs themselves enjoyed it.

“We charged an entry fee for those talks and nowadays I think more and more people expect things to be free.

“I haven’t committed to another festival in 2019 because it’s quite challenging to put this on when you’re also running your own business.

“I’d like it to continue as it has a lot of positive aspects and it’s worthwhile but it would be better if someone could take overall charge and I could just run part of it.

“For now we’ll just have to watch this space and see what happens.”