Freedom of village given to award-winning bloom chief 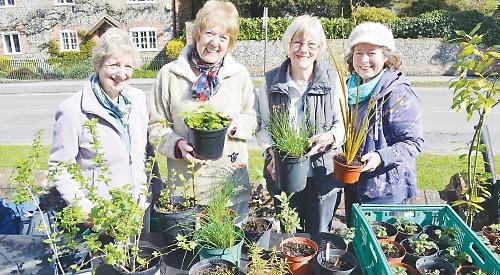 A WOMAN who has led Goring to five Britain in Bloom awards is to be given the freedom of the village.

Stephanie Bridle, who lives in Cleeve Road with her husband Ron, chairs the committee which has won three golds and two silver gilts in the Thames and Chilterns regional competition since 2012.

The 73-year-old former parish councillor has also helped other good causes in the village and is a member of the volunteer group that is writing the Goring neighbourhood plan.

The freedom of the village award recognises those who have made exceptional contributions to the community.

Mrs Bridle was nominated by Andy Richards, a retired eye surgeon, whom she has known since she arrived in the village 40 years ago. This was endorsed by 17 other villagers before being accepted by the parish council.

She will be presented with a certificate at a special ceremony and her name will be added to an honours board at the village hall alongside that of her husband, who was similarly honoured in 2010. Mr Bridle also received the British Empire Medal for his services to the village in 2014.

Mrs Bridle said: “I’m obviously very proud and pleased to have been nominated. People have said such lovely things and it’s very rewarding to know that I’ve made a difference.

“I’m the sort of person that will always take on a job that needs doing or tackle a problem that needs solving. I come from a long line of feisty women and feel the need to keep up the family tradition! After being here for so long, I think I know everyone and I’ve got a reputation for being well-connected. If people need information about something they’ll say, ‘ask Stephanie, she’ll know who you need to speak to’.”

Mrs Bridle was born in Kent and grew up in Wales and the Peak District before moving to Manchester to train as a nurse. She married her first husband, Dr Richard Smith, and the couple had three children, Ed, 47, Alex, 43, and Will, 37.

They moved to Goring in 1979 and set up Pharmacopius, a pharmaceutical research firm, which was based at their home before moving to CDR House, off Gatehampton Road. The building is now being demolished to make way for housing.

Mrs Bridle’s involvement with the company ended in 1995, when she and her husband divorced.

She then worked as a freelance recruiter for some years before retiring. She married fellow villager Mr Bridle, who also worked in pharmaceuticals, at St Thomas’s Church in 2002.

Mrs Bridle was a member of Goring Primary School’s parent-teacher association and a school governor for some years. She was elected to the parish council in the early Eighties and served for 11 years before standing down to focus on her business. She served for another four years from 2007 to 2011.

Mrs Bridle said: “I went to a council meeting to talk about a controversial planning application and afterwards the chairman approached me to say I’d make a good councillor.

“I stood at the next election and won, which was quite an achievement because back then we had 25 candidates for 15 places, so it was well fought.

“The second period was quite fraught with internal political struggles, some of it quite personal, but I survived and I think the council has greatly improved since.”

Mrs Bridle became involved in Britain in Bloom in 2012 when she and her husband organised the village’s diamond jubilee celebrations, which included a street party that stretched 1km between Goring and Streatley.

The couple and their volunteers decorated the village with hanging baskets and judges for Britain in Bloom suggested that they enter the competition.

Since then they have carried out a number of improvements, including renovating a patch of land on Gardiner recreation ground and creating a wildflower area at the BT exchange off High Street.

Their next project is to set up floral tubs at Goring station and sow the embankments with shrubs. Mrs Bridle said: “We did very little in the first year because we didn’t have much time but we still won silver gilt and a separate award for the best jubilee celebrations.

“It has just kept growing because you get hooked on it. The judges are very good at pointing out, in a constructive way, the areas where you could improve and you start to see the potential for all the good things you could do.

“We never take it for granted that we will win and didn’t expect to do well this year. We felt very lucky and very pleased to win gold again.

“Our committee has steadily grown and the village is really switched on to what we do. They’re all delighted and there’s such a positive attitude towards us. I just enjoy making people happy, making the place look pretty and impressing visitors with the effort we put in. I couldn’t do it without such a great group of people around me. The real reward is seeing the improvements we’ve made and the comments we get about them day to day.”

She said Goring was not a sleepy village but very dynamic with lots of groups run by residents with interests in, for example, gardening, music or dancing.

“It is a lovely place and I think we have a responsibility to keep it that way,” said Mrs Bridle. “Places like this are dying out and while we don’t want to preserve it in aspic, we have to make sure it isn’t just built all over.”

She said there was no competition between her and her husband, adding: “We work in partnership on lots of things and I suppose we were attracted to each other by a shared love of the community.

“However, now that we’ve both got the freedom of the village I can almost see the ‘his and hers’ certificates sitting side-by-side on the loo!”