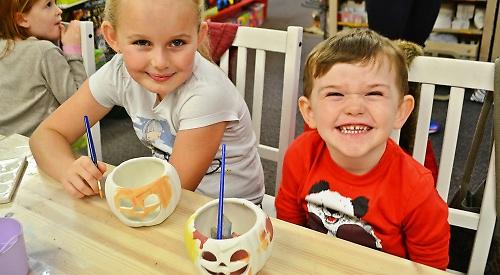 The business, based at The Arcade in High Street, hosted a week of activities over the half-term holiday, including clay sculpting, decoupage, mask decorating and pottery painting.

Youngsters attended with their parents and could take their creations home at the end of each day.

The event was run in partnership with the neighbouring Chocolate Café, whose staff provided refreshments. It was the first in a series of sessions which Inspiration owner Jeanne Hunter will run every half-term with a different theme according to the season.

These will take place on the shop’s upper floor, which was recently refurbished to become a craft area.

The shop previously ran craft workshops at the unit next door, now the Marvellous Hair Company salon, then briefly at the Chocolate Café.

The workshops are promoted by a giraffe mascot called Garry, which was decorated with strips of different coloured wrapping paper by Mrs Hunter’s son Gabriel, 11.

Mrs Hunter, who has run Inspiration since 2005, said: “It gives the kids a chance to enjoy themselves while their parents relax and have a tea or a coffee.

“I keep the workshops affordable because I know how expensive it is to entertain children and it’s important to encourage their creativity.

“They have proved to be really popular so far and the children learn so much, even little skills like how to use a pair of scissors. It’s also good for their health because they all live in the village and walk here from their homes.

“They really enjoy messing around with paint, glue and glitter — the inside of my car is now covered with glitter but it’s worth it. They love being in a group, meeting new friends and giving each other new ideas.

“It’s also important from a business perspective as it’s hard to survive on retail alone, especially for small independents like us. Customers like to have experiences and working with the café means we both benefit.”