Residents urged to have their say on future development of village 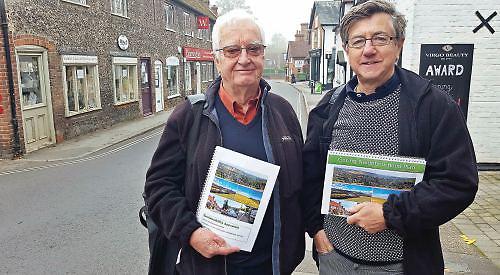 RESIDENTS of Goring are being urged to give their views on a blueprint for the future development of the village.

The Goring neighbourhood plan identifies four sites in the parish as being suitable for development in order to meet the village’s quota of 94 new homes to be built by 2027.

It has been put out to public consultation until December 13 after which it will be submitted to South Oxfordshire District Council, the planning authority, for examination by an independent inspector.

The district council is currently revising its local plan, of which neighbourhood plans form part, and is considering increasing Goring’s quota to 140 homes by 2033.

It recently carried out an assessment which showed that about 66 hectares of land — enough for 2,000 houses — in the parish are available and suitable in principle for development.

The neighbourhood plan says at least 46 new homes could go on the south-eastern corner of the field immediately north of Springhill Road, which could also be accessed to the west off Wallingford Road. The other three sites are the eastern half of the field between Manor Road and Elmcroft (at least 20 homes), the warehouse and car park at Thames Court, off High Street (at least 14) and land behind the cottages south of Icknield Road (at least another 14).

The volunteer steering group which compiled the plan under the supervision of Goring Parish Council says the plan will ensure that enough houses of the right type are built and that the village is not vulnerable to speculative development on a larger scale.

It believes that a quota of 140 would be too high as the village is constrained by the Chilterns Area of Outstanding Natural Beauty and the River Thames to the west.

The document says more than 80 per cent of new homes should have up to three bedrooms to support young families and older people looking to downsize. At the moment, 45 per cent of houses in Goring have four or more bedrooms.

The plan says the three greenfield sites identified as being suitable can only be developed if measures are taken to offset the impact on the AONB.

These should include new trees and hedges, new facilities such as playgrounds, orchards and open green spaces, adequate parking to prevent overspill and new footpaths and cycle routes.

The plan also calls for three “strategic” projects to be conducted by the parish council as follows:

⚫ Regenerating the village centre, especially around The Arcade.

⚫ Helping the village primary school to either find a new site or improve its existing one.

Mike Stares, co-chairman of the steering group, said: “There’s a difference between the ‘need’ calculated by the district council and the actual need.

“Rather than starting with a rather artificial figure, we started by looking at how much land we actually had and identifying how much of that was suitable.

“We narrowed it down by asking residents to vote on site selection criteria rather than specific sites because inevitably people vote against developing land near where they live. It means the process was more objective, rational and based in facts.

“Strictly speaking, national planning policy states that we should only develop the brownfield site at Thames Court but we’ve sought to identify sites where that can be overcome by substantial mitigation measures. We recognise that there’s a need for some development and wouldn’t just oppose it for the sake of doing so.

“There’s an historic weighting towards larger properties in Goring and we want to address that, not just for the sake of young families but also for older people who want to downsize and remain independent rather than going into some form of care.

“Our conversations with the district council about housing numbers haven’t been conclusive but we won’t review the figure unless more land is offered and found to be suitable.”

Mr Stares said Goring was better off having a neighbourhood plan despite controversies elsewhere where they have been overriden by planning authorities and government inspectors ruling on appeals by developers.

He said: “We’d obviously be horrified if our plan was overridden but if nothing is done then the gates will be far wider open. We’ve been accused of scaremongering about the number of homes that could be built without it.

“Obviously there’s no way that 2,000 new homes would be allowed but a lot of applications would come forward and Goring could change forever, which is frightening.

“We’d be at the mercy of the district council and it might prioritise the AONB lower than we do as it’s a matter of judgement.”

A summary of the plan is to be delivered to every home in the village and full versions may be inspected at the village library or online at www.goringplan.co.uk

Consultation events will also be held at the community centre in Station Road on November 25 at 9am and at the Bellême Room in the village hall on December 1 at 6pm.

Visitors will be able to meet members of the steering group and ask questions.

Kevin Bulmer, chairman of the parish council, said: “I ask, and strongly encourage, all of you to read this document and register your comments on its contents and recommendations, both good and bad.”