Former mobile beauty salon named one of best in country 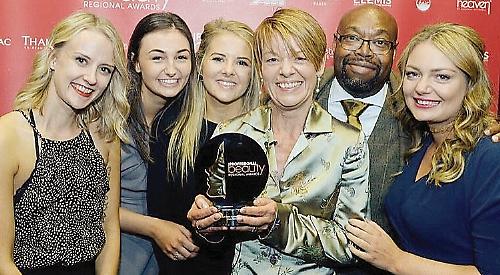 A BEAUTY salon in Goring has been named among the best in the country.

Virgo Beauty, which opened at the former Nappers Fine Food premises in High Street three years ago, won the best boutique salon title in the South-West and Wales region of the Professional Beauty Awards.

Owner Sarah Virgo, who founded the business as a mobile service in 1992, entered by submitting a statement explaining various aspects of the business, including the services on offer and the training available to her staff.

Judges then visited the salon before confirming she had been shortlisted. After being crowned at the regional finals in Manchester, she is now in the running for the national title, which will be announced in February.

The salon will be visited in secret as part of the judging process.

Mrs Virgo, who lives in High Street, Goring, with her husband Tony, said: “We felt it was the right time to put ourselves forward for the competition, which is very much the ‘Oscars’ of our industry.

“Unlike the hotel sector, there isn’t an independent star rating system so it’s important to do things that make us stand out and show that we’re interested in continually developing and improving.

“I was absolutely delighted to win and very surprised as I was happy just to have been shortlisted.

“I’m proud of the service my girls offer and confident that they all excel at what they do.

“Winners in other categories included Harrods so we’re ecstatic to be on that level. We’re up against the best in the country at national level so we will just have to see what happens next.” The salon employs six therapists and a receptionist and its services include manicures and pedicures, non-surgical facelifts, waxing, facials, massages, tanning and electrolysis as well as male grooming.

Mrs Virgo said: “This award shows it was the right decision to open a salon here. We’ve got a lot of regular customers and it’s thanks to their support that we’ve been able to succeed.

“Goring is a wonderful place to do business because there’s a thriving community of independent retailers and we all support one another.”