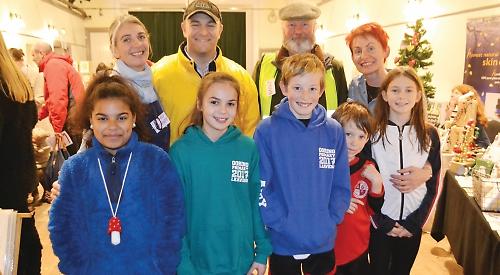 About 700 people visited the event, which was held at the village hall. In previous years it has raised money for the village’s twinning association but it has been taken over by villagers Mairead Herlihy and Deborah Hedley, who both have children at the school.

There was also a raffle with prizes donated by local businesses including estate agent Warmingham, the Goring Grocer, Mary S Interiors and Pierreponts café. Mrs Herlihy said: “It was a really good weekend. We had lots of people coming through the door and they all showed an interest in coming back next year.

“People donated lots of cakes, soups and quiche and businesses were extremely generous with the raffle prizes — they all agreed to donate as soon as we asked.

“This event has been running for many years now and it has a great reputation for being friendly and welcoming so we were very happy to take over.

“All the stallholders said they did well and we had a few success stories from people who were taking part for the first time, so it was a big success all round.”

The proceeds will go towards purchasing new laptops and upgrading the school minibus.