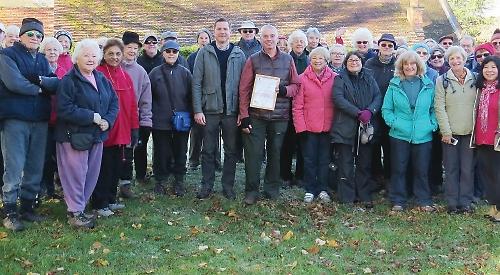 THE co-ordinator of Goring’s free health walks has been honoured by the Ramblers for his outstanding contribution.

Bernard Novell has been involved with the group for more than a decade and has trained hundreds of people to set up and run similar groups across the South.

He used to sit on the advisory panel that writes the training material for leaders and his photographs of the South Oxfordshire countryside have appeared in the literature.

Mr Novell, 65, of Elvendon Road, Goring, was presented with a certificate at one of the group’s regular walks from Rectory Garden, off High Street. He said he was honoured to receive it.

Mr Novell said: “I don’t know the exact figure but I’ve trained hundreds of people and they told me I’ve trained twice as many as anyone else in the South.

“I think it’s just because I’m willing to travel out of my area and work at unusual hours if need be. Apparently my training is seen as ‘legendary’, which I didn’t realise until the presentation.

“It’s just something I do because I’m passionate about it. My wife Judy and I walk three times a week and I’ve never thought about asking for recognition. It’s quite humbling, really.”

Mr Novell, who is also chairman of trustees for Goring village hall, joined the group a few years after it was formed in 1998 by Veronica Aldridge and Dr Rhys Hamilton, a former village GP.

He volunteered as an administrator as the group was expanding and Mrs Aldridge was struggling to dedicate enough time to it. He eventually took charge and began training other groups’ leaders in how to pass on their skills.

Mr Novell also advised the Ramblers when they took over responsibility for the scheme from Natural England about five years ago. He would travel to meetings in London several times a year and he still occasionally gives guidance on training matters.

In the past year he has helped to set up three new groups in Botley, Sandhurst and Shrivenham.

The Goring group organises up to nine walks per week at four ability levels ranging from short two-mile strolls to seven-mile, 90-minute hikes.

There is also a “first steps” group for seriously ill or immobile people who are recovering their fitness.

Mr Novell said: “I’d done circuit training in my younger years but never walked regularly until I joined the group.

“It really is a ‘wonder drug’ and we’re trying to get more GPs to prescribe walking because it helps with so many conditions, including cancer, osteoporosis, diabetes and high blood pressure.”