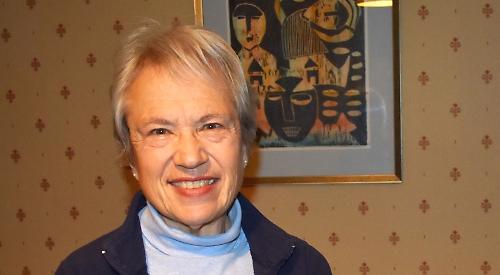 AN annual award for people who support Oxfordshire’s carers has gone to a woman from Goring for the second consecutive year.

Ann Hart, a former chairwoman of the parish council, was presented with Age UK Oxfordshire’s Josie’s Award for her work as leader of the village’s carers group.

She was nominated by the group’s founder Christine Tucker, who won it a year ago.

The award was one of several presented as part of the charity’s Dignity In Care awards scheme.

Mrs Hart, 71, of Whitehills Green, served on the council for several terms before stepping down in 2010 to look after her husband Christopher, who had been diagnosed with terminal prostate cancer and wished to die at home.

He passed away the following year at about the same time that Mrs Tucker, a widow who cared for her husband Geoffrey in his final days, launched the group.

Mrs Hart joined in order to help others in a similar position and took charge a few years later when Mrs Tucker stepped down due to other commitments.

The group meets monthly at the village community centre in Station Road and welcomes speakers from care charities and organisations across the county.

It puts pressure on councils and care providers to improve their services for carers and regularly liaises with the Goring Medical Practice to help GPs and nurses to understand the challenges they face.

As a result, the surgery has produced an information leaflet for people who are new to caring and its services for carers were recently rated “outstanding” by the Care Quality Commission.

More recently, the group was part of a successful nationwide campaign to prevent attendance allowance, a form of financial support for the elderly, from being devolved to local authorities and therefore put at risk of being cut.

It also lobbied against Oxfordshire County Council’s decision to cut funding for 47 day services, including the village’s lunch club, which now relies entirely on volunteers.

Mrs Hart, a retired teacher, said: “I felt the challenges facing many carers were isolation and a lack of support. It doesn’t always come naturally and I didn’t want others in that position to struggle.

“People are often plunged suddenly into the role with no prior experience or warning so it’s important that they can get guidance and aren’t left feeling alone.

“The group has changed a lot since I took over in that we take more of a campaigning role. We’re often contacting our MP John Howell and the Prime Minister about important issues.

“It’s a place where people can chat, encourage each other and exchange information. We also have a very good link with the surgery as its receptionist Chantelle Harding attends our meetings as ‘carers’ champion’.”

Mrs Hart was presented with her award by Tim Stevenson, the Lord Lieutenant of Oxfordshire, at a ceremony at the King’s Centre in Oxford. She said: “I was very surprised but I’m pleased that people get something out of it.

“Visitors often tell me that it makes a difference finding people in the same boat as them and makes them feel less alone.

“It’s so important to know that you aren’t struggling by yourself. People often find it difficult to make that first step of approaching us but it makes a big difference.

“They know they’re looking after somebody at home but at first they don’t always recognise themselves as carers.”

A spokesman for Age UK Oxfordshire said: “Ann has continually maintained her interest in carers’ issues and combines a supportive role with an informative one, always striving to find interesting and appropriate speakers.

“Any carers needing support are put in touch with her, often through personal recommendation or via the local doctors.

“She spends as much time as is needed helping with signposting as well as emotional and practical support.

“Her commitment and determination are without question and, being very politically aware, she attends any meetings which may provide insight or further useful information for the cause.

“It goes without saying that this is a voluntary role and Ann is known and acknowledged locally as the ‘go to person’ on carers’ issues.”

All carers are welcome to attend the group. For more information, call Mrs Hart on (01491) 873857 or email ann_hart@btopenworld.com