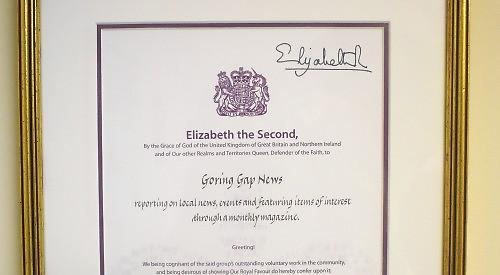 Goring Gap News, which is delivered free to every household in Goring and Streatley, was set up by residents Kit Richardson and Norman Radley late in 1987 and the first edition was published in January 1988.

It is produced entirely through the efforts of volunteers, from contributors, editors, proof-readers and distributors to the management committee and the team selling advertisements, which is how it pays its printing and running costs.

The Goring Gap News Association, which runs it on a not-for-profit basis, donates money from its surpluses to good causes in both villages and has awarded more than £118,000 over the past three decades.

In 2004 it won the Queen’s Golden Jubilee Award for Voluntary Service, which recognises groups of people who make outstanding contributions to their communities.

The team was presented with a trophy at ILAM House, near Lower Basildon, and shortly afterwards met Her Majesty during a ceremony at St James’s Palace.

The magazine is put together each month by editor Jennifer Bending, who has lived in the village for 40 years and has held the role since 1999.

She has a team of up to five sub-editors who lay it out at their offices at Goring community centre in Station Road. Articles and photographs are contributed by villagers and compiled in the week before publication by sports, arts and business editors.

The finished product is then delivered door-to-door by a network of 70 distributors.

Mrs Bending said: “It’s a very efficient way of doing it and it’s quite amazing because people don’t really see it happening behind the scenes. They just expect it to come through their letterboxes every month.

“Some of our distributors are of a good age so it helps keep them moving and they enjoy being a part of it. They do a wonderful job and we’d be lost without them.

“I enjoy knowing what’s going on in the village and the fact that everybody knows me when I walk around. I’ve worked with some very charming people and it has been very pleasant.

“Goring is an incredible community where people get on well with each other and are always up to interesting things.

“There’s always something going on, whether it’s a community event or somebody winning an award or doing something for charity, so you’re never short of articles. I never have a problem filling the magazine, put it that way!

“People love it and say they always grab it the minute it comes through the door then read it from cover to cover.”

Early editions were produced without the use of computers. Instead, a team of volunteers based at Goring village hall glued typewritten articles to a “master” page which was then duplicated.

These were entirely in black and white and featured only line drawings, including a masthead of Goring bridge by Charles Halliday.

Mr Richardson died a short time after the magazine was launched while Mr Radley, who served as editor for some years, stepped down from the association in 2010.

Copies of every magazine produced have been bound and donated to the Goring and Streatley Local History Society.

The first issue covered an appeal by residents of Wallingford Road for a pedestrian crossing near the junction of Elvendon Road and Mill Road, the sale of land opposite the station to build what is now Railway Cottages, off Reading Road, and plans to strengthen the weir between the villages.

There were adverts for businesses which have since closed, such as Nappers Fine Foods and the Goring Gap Garden Centre in High Street, now home to Virgo Beauty and Masoom’s Indian restaurant respectively, and the Queen’s Arms pub in Reading Road, now a Tesco Express, as well as Kiddies Klobber, Hurst Butchers, Bungalow Stores and Edwards’ Country Store.

Another advertiser was Westholme Stores or Jack’s in Wallingford Road, which also celebrated its 30th anniversary this month.

Mrs Bending said: “It’s great to have created a record that people can look back on to see what life used to be like in the villages.”

Paul Bradstock, an Oxfordshire deputy lieutenant who became association chairman in 2010, said: “I was keen to get involved because I wanted to do something positive for the community and couldn’t think of a better way because the Goring Gap News touches so many people.

“We’ve been able to give money from our surplus in more recent years, perhaps because we’ve become more efficient.

“It started as small amounts, maybe for young people going off on gap years and things like that, but as we’ve started to make more we’ve been able to help bigger organisations like the village hall or St Thomas’ Church.

“We’ve helped to improve a lot of facilities over the years and we’re very much a part of the village.”

• The Goring Gap News Association’s annual meeting will take place at the community centre on March 20 at 2.30pm. All welcome.