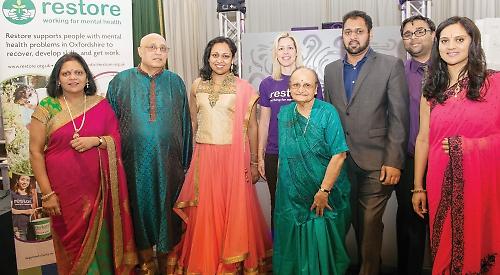 MORE than 130 people attended an Indian-style celebration in Goring for charity.

It was to mark Jayesh and Varsha Patel’s 30th anniversary of running Westholme Stores in Wallingford Road.

It raised more than £3,000 for Restore, a mental health charity based in Oxford.

The couple, who have three grown-up children, have become well-known members of the community and have many customers who have been shopping at their store since they arrived.

Mr Patel, known locally as Jack, said the evening was a success.

“It was very popular,” he said. “People in the village want us to do it again. It was really enjoyed by a lot of people and they are all saying ‘can we make it a yearly event?’

“Everybody was on the floor dancing — they were loving it.

“The support from the people in the village is great. It’s a very close community and we love it here. They appreciate what we’re doing, which is great.”

The evening included a raffle with prizes donated by businesses in the village. These included meals at Masoom’s Tandoori and the Catherine Wheel pub, vouchers from Virgo Beauty and goodie bags from Goring Hardware.

The West Berkshire Brewery and Ridgeway Brewery donated barrels of beer. The couple’s children and customers clubbed together to buy them a holiday voucher for £250 which was presented on the night.

In 2001, Mr Patel became ill due to the stress of competing with supermarkets and was unable to work for several months while his wife kept the business going. During this time he received counselling from Restore, which helped him regain his enthusiasm for the business.

After recovering, he turned around the shop’s fortunes by adding a specialist beer section. It now stocks between 350 and 500 different ales and has been praised by the Campaign for Real Ale.

Mr Patel said: “Restore is very close to my heart because I got my therapies there when I suffered from mental health issues. That was the place where I went and they were really helpful. They got me back into work and helped me get through my hard times.”

The couple’s younger daughter Nikita, who organised the evening, said: “It was very successful and everyone enjoyed themselves.

“My parents absolutely loved it and I don’t think they expected it to be as grand as it was — they really appreciated it.

“The most important thing  was raising more than £3,000 and donations are continuing.”

The couple both grew up in Kenya and moved to London with their families in the Seventies, when they were about 16, and were later married after being introduced by their parents.

Mr Patel worked as a sales assistant and then departmental manager at Selfridges in Oxford Street before opening a newsagent’s in Mitcham in 1981, where he and his wife worked.

The couple moved to Goring after having their eldest daughter Shrina, now 33, as they wanted to raise a family in a quiet village. Nikita, 28, and son Rupen, 25, followed.

The couple bought the freehold of the shop in 1988 and soon afterwards extended the rear to offer a wider selection of goods.

• More pictures from the party will be published in next week’s Henley Standard.