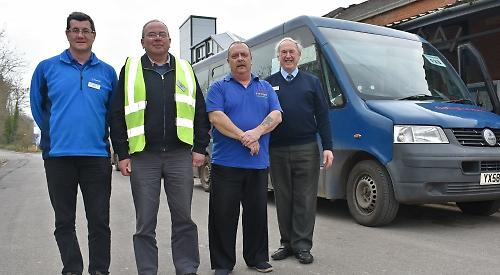 A COMMUNITY bus service for the Goring area is celebrating its first anniversary by expanding.

Going Forward, which was founded by villager Mike Ward to take over the 134 from Goring to Wallingford, is trialling a new commuter route to Goring station from South Stoke.

There are two departures from Glebe Cottages in South Stoke at 7.10am and 7.40am which run along Ferry Road and the B4009 then Icknield Road, Springhill Road and Elvendon Road in Goring. These connect to the 7.30am and 8am trains to Paddington.

There will then be an evening service following the same route in reverse which will depart shortly after the 5.18pm train from London arrives at 6.09pm. This will set down on request at any point where it is safe to do so.

Travel is free of charge during the trial period, which started on Monday, but the non-profit company is encouraging donations towards running costs.

The trial route will become permanent if it proves popular.

Mr Ward, an accountant who lives in Elvendon Road, launched the company after Go Ride, the 134’s previous operator, pulled out for logistical reasons. He believed it was still viable and wanted to keep it going because many Goring residents are elderly and could become isolated if they couldn’t get out.

Now the service is thriving and offers extra afternoon and evening journeys and a Saturday service.

Mr Ward has since launched several new routes, including the 142, which replaced part of Thames Travel’s 143 service from Whitchurch Hill and Whitchurch to Reading via Tilehurst.

It also runs a school service to Wallingford School from South and North Stoke and has organised special trips to various events.

Extra journeys are to be added to the 144 this summer and there are plans to launch a Sunday service from Goring to Henley via Wallingford, Benson and Nettlebed but this would require additional drivers.

Going Forward started with a fleet of two 14-seater minibuses but now has five as well as four paid drivers and a roster of volunteers who fill in when staff are away or ill.

Since its launch, it has completed more than 9,800 trips and cancelled only 15, most of which were due to snow in December.

There have been 37,587 individual passenger journeys, of which 85 per cent were made by concessionary bus pass holders.

Each vehicle costs about £160 per day to run and most of the money comes from fares and bus pass reimbursements from Oxfordshire County Council, West Berkshire Council and Reading Borough Council.

The company has also received grants from parish councils including Goring Heath and private donations including £1,550 from South Stoke’s community barbecue and £500 from Goring Fire Brigade Trust.

Mr Ward said: “There’s definitely demand for this kind of service. However, people say they want it but don’t always use it regularly, which is the main problem we currently face. You can’t expect it to be there if you only travel every six months because how will it survive in the meantime?

“Only the 134 pays for itself at the moment but we’re working on ways to increase usage on the others.

“Our passengers give very positive feedback as we’re a lifeline they wouldn’t otherwise have.

“The county council no longer subsidises any buses due to budget cuts while commercial operations wouldn’t run it.

“The past year has been an interesting experience and very different from anything I’ve done previously. There’s been a lot to learn, from publicity to hiring drivers and managing the payroll, but statistics show we’ve been very reliable.

“Another problem is volunteers will cover shortages but won’t commit to a regular rota.

“Non-profit operations are probably the way forward in rural areas across the country but I still think councils should reconsider some kind of subsidy.”

The company needs more volunteers to either drive buses or help with marketing and administration. For more information, call 07484 605888 or email littlebluebus@
yahoo.com