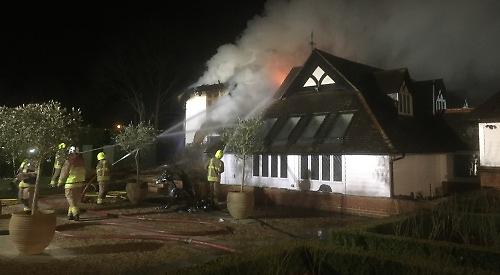 SIX fire crews from two counties were sent to tackle a massive blaze at a thatched home in Goring.

The fire broke out in the roof of the riverside property at about 9.45pm last night (Friday, February 24) and soon became so large that the glow could be seen from as far away as Didcot. It was spotted by passers-by, who alerted the emergency services.

They wore breathing apparatus and used numerous water jets to bring the blaze under control, pumping water from the Thames to attack it from three angles. Crews are still at the scene this morning to ensure it does not reignite and will remain there for some time.

An Oxfordshire Fire and Rescue Service spokesman said: "Despite the timber construction and the complexities associated with the layout of the premises, firefighters were able to save a large part of the structure although the thatched parts of the premises were severely damaged by fire."

Group manager Jason Crapper said: “Given the time at which this fire occurred, it is fortunate that it was spotted by passers-by otherwise the losses could have been even greater. I’m hopeful that the rapid intervention will enable the building to be repaired."

The building is thought to have been empty at the time. The incident is not being treated as suspicious but will be investigated to determine the cause.