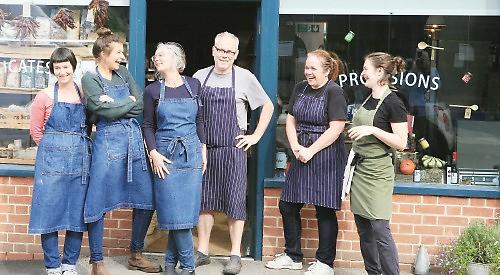 A DELICATESSEN in Goring is in the running for an award.

The Goring Grocer in High Street has been shortlisted in both the delicatessen and newcomer of the year categories at this year’s Farm Shop and Deli Awards, which will be announced at the Birmingham NEC on April 16.

It was nominated in September and had to seek votes and reviews from customers to progress to the final round. It was judged not only on the number of votes but also the quality of the comments.

Judges confirmed the business, which opened at the former Art at Goring premises in late 2015, had made the grade after paying a “secret shopper” visit last month. It is the only nominee to be shortlisted in more than one category.

The deli is run by villagers Stuart and Caroline Pierrepont, who used to run the White Lion at Crays Pond and Pierreponts café in Goring high street, and has three full-time staff and four part-time staff.

The business sells cheese, charcuterie, vegetables, dairy, wines and preserves as well as bread and ready meals cooked on the premises.

Mrs Pierrepont said: “Having only been here for two-and-a-half years, we’re really pleased to be standing in two categories. We’ve run various businesses in this area for 18 years so everyone knows us, which is really nice.

“We’ve got a lot of regular customers from both the village community and further out and we have first-name relationships with many of them.

“Winning this would be great news for Goring as a whole because we’ve got a lot of successful businesses that complement each other. It would also be wonderful for our staff, who are very skilled and have put a lot of time and energy into ensuring our success.”