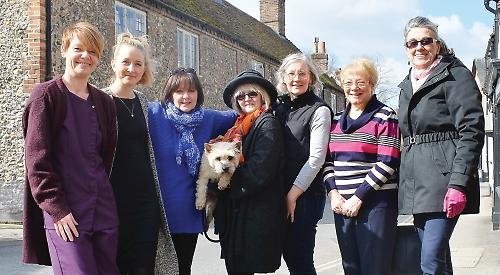 THE owner of a womenswear shop in Goring has thanked fellow traders for their support after she was forced to close due to flooding.

Ruby Pepper in High Street will be shut for the foreseeable future after a pipe in the roof burst, flooding the ground floor with more than 2ft of water.

Thousands of pounds worth of stock was ruined and the structure of the Grade II listed brick-and-flint building may have been damaged in the incident on March 10.

Gina Bennett, who opened the shop in 2014 and recently refurbished it, was alerted by staff at Warmingham estate agents next door who had seen water flowing from beneath the front door of the shop at about 8.30am and called 999.

Two crews from the fire station in Icknield Road arrived within minutes and a keyholder let them in.

The firefighters shut off the water supply and were mopping up when Mrs Bennett arrived from her home in South Stoke with her husband Arthur and grown-up daughter Holly.

Neighbouring businesses including Warmingham’s, the Sarah Virgo beauty salon, Albert Fields hairdressers, Mary S Interiors and the Inspiration gift shop took in as much stock as possible to dry it out.

Staff at the Chocolate Café and the Goring Grocer provided free hot drinks and snacks.

Mrs Bennett, 55, a former life coach, said: “When they rang to tell me about the flood, I just screamed and got there as soon as I could.

“Sean Absolom and and his team at Goring fire station turned up in no time at all and they were just amazing.

“The water level had gone down by the time we arrived but you could tell from the damage how much higher it had been.

“Fortunately, the other shopkeepers had already rushed in and pulled out as many rails as possible in the hope of saving them.

“It all went by in a bit of a haze as we were all in a state of shock but having that support was so beneficial.”

She will be able to claim for her lost stock on her insurance but does not know when she will be able to re-open the shop until the damage to the building, which she rents, has been assessed. However, other businesses have offered to let her hold “pop-up” sales in their premises.

Mrs Bennett said: “It’s too early to say when we might re-open or exactly what needs to be done but there may be more damage than we initially anticipated. Water tends to seep into every possible crevice.

“It’s horrible not knowing exactly where things stand but that’s out of our hands and our landlord has been very supportive.”

Mrs Bennett was running the shop with assistant Louisa Kruczko, whose last shift was on the day of the incident and helped clean up, and part-time volunteer Gillian Murray.

She said: “It’s not just about being a ladies’ fashion boutique but the whole community package. If people are having a dull day they can just pop in for a browse and a chat with us.

“We’re a very close-knit team like the Three Musketeers and know our regular customers well.

“I hadn’t even worked in a shop before but it has become a real passion. I’ve only had a few days off over the past few years and that makes it all the more strange to now be without it.

“I don’t have an online presence because I value things like service and the way we fit into the wider Goring retail community. We help each other out by drawing people in and making the village an attractive place to visit.

“The fact that I’ve had so much help shows that it’s worth being part of a caring village — you just don’t get that human touch any other way. I couldn’t have wished for a better group of people to have around me.

“The flood was emotionally devastating and I’m still coming to terms with it but I will take up the offers of selling from rails in other shops, for which I’m unbelievably grateful.

“I’m a very happy and optimistic person generally and while I’ve temporarily lost my mojo I know it’ll come back.”

Caroline Pierrepont, who runs the Goring Grocer with her husband Stuart, said: “The other shops were happy to help as it was a horrible sight for Gina to be greeted with. The fire brigade did an amazing job to get the place as dry as they could.

“It’s very sad because small businesses are up against so many challenges and this is the last thing you want to deal with.”

Jeanne Hunter, of Inspiration, said: “I wish we could have done more. It was disastrous and so upsetting because Gina put so much energy into the refurbishment.

“We’re such a small community and would have done the same for anyone who was in trouble.”