Hat-trick for delicatessen named best in the country 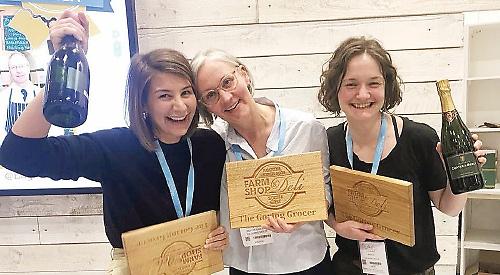 A DELICATESSEN in Goring has won three awards.

The Goring Grocer in High Street was among the finalists for both the national delicatessen and newcomer of the year titles at this year’s Farm Shop and Deli Awards, which were announced on Monday.

It won both and was then named the overall winner for the South-East.

Caroline Pierrepont, who opened the business with her husband Stuart at the former Art at Goring premises in 2015, attended the event with her front-of-house manager Phoebe Hayter and kitchen manager Alison Rigg. The results were announced by chef and BBC Radio 2 food presenter Nigel Barden, who visited the shop shortly after judges paid a secret visit in February.

He presented the women with engraved wooden plaques and bottles of wine.

Mrs Pierrepont said: “I have to admit there were some tears. I phoned Stuart, who was holding the fort at the shop, and I’m told the staff had never seen him so excited.

“Nigel said we were a really cool place with a unique atmosphere and he really understood how much work goes into making it a success. We’re aimed at the pricier end of the market but our quality is incredibly high so we’ve always had huge demand.

“It was a long drive back but we had a few celebratory drinks at the Miller of Mansfield and will have to take all our staff out to dinner soon. It’s a wonderful morale boost for them and great news for Goring as a whole.

“People are really proud of our achievement and we’ve had so many messages of congratulation both in person and online.”

The deli was nominated in September and had to seek votes and reviews from customers to reach the final.

The Pierreponts previously ran the café bearing their name in Goring high street.