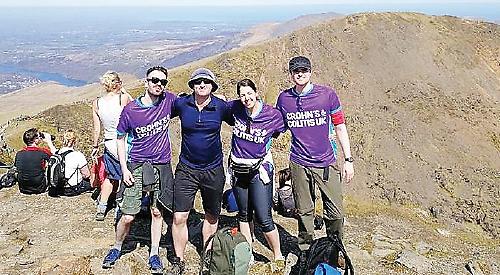 A MAN who had his bowel surgically removed after a serious illness has climbed Mount Snowdon for charity.

Kevin Tappern, 31, of Wayside Green, Woodcote, scaled the 3,560ft peak in north Wales with his brother Steven, 35, and three friends from Reading,

They raised almost £1,000 for Crohn’s and Colitis UK, which raises awareness of the digestive disorders.

The climb took place on Mr Tappern’s 31st birthday and the group reached the summit in about three hours following a 12km circular route along one of the easier ascents.

They stayed at the peak for about 20 minutes to eat lunch and take photographs before coming back down.

Mr Tappern, an IT technician, said: “It was tougher than I expected but not necessarily because of my stoma, more just the exertion that anyone would feel climbing a mountain. It was taxing on the knees more than anything else, especially the high impact when descending on rocky and uneven ground, and it got steeper and rockier near the top so we had to steady ourselves with our hands.

“We were chatting among ourselves quite a bit when we started but there was a steady rise in the gradient and we increasingly kept ourselves to ourselves as we focused our energy into the climb.

“The weather brought a lot of walkers out, so one of the challenges was negotiating our way around everybody else as all the paths came together near the summit. We took a few breaks to relax our legs but we reached the top in a good time and really appreciated the views. It was a lovely clear day and you could see all these stunningly beautiful lakes and scenery for miles.

“It was also a lot hotter than the forecast so we got a bit sunburnt.”

After their descent, the group celebrated their achievement and Mr Tappern’s birthday with beer and fish and chips.

He underwent an emergency ileostomy at the Royal Berkshire Hospital in Reading in March 2016 after being struck down with acute ulcerative colitis.

Despite losing more than three stone throughout his illness and treatment, he recovered his strength by walking regularly and attained his black belt in jiu-jitsu later that year.

Mr Tappern said: “This was a great experience and I’m glad I did it but I think that’s me done climbing mountains.

“The next step will be to find something different like a series of walks or even a skydive.”