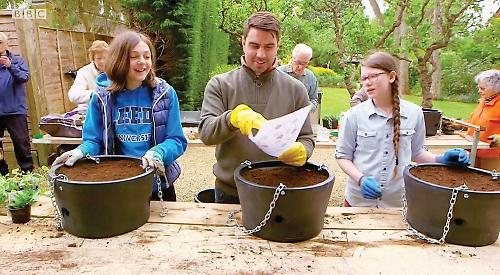 GORING’S successful battle for gold in the Britain in Bloom competition has been broadcast to the nation.

The village and its Goring Gap in Bloom committee, who have been entering the annual contest since 2012, starred in an episode of Britain in Bloom on BBC2 on Thursday last week.

The documentary series comprises 15 half-hour episodes, each focusing on a different town or village preparing for inspection by the Royal Horticultural Society’s judges.

Despite a major planting project at Goring station falling through at the last minute, the village won its third gold in the Thames and Chilterns region.

Presenter Chris Bavin, a former grocer and produce importer, was seen arriving by train to be met by Mrs Bridle and Mrs Hurst who were putting up posters appealing for more volunteers at the station.

The pair explained that they were known informally in the village as the “gardening grannies”.

Mrs Bridle, who has lived in the village for about 40 years, said: “We don’t like it and certainly don’t think it fits our image!

“If you live in a place, you get a bit complacent about the bits of it that aren’t particularly nice.

“The station is grey and utilitarian at the moment and gives no idea of the pretty rural setting you’ll see if you get off here.”

The trio returned to Mrs Bridle’s house in Cleeve Road, where her husband Ron and a group of volunteers were planting up more than 40 baskets to be hung around the village.

They ranged from young children, including Mrs Bridle’s granddaughter Caitlin Smith, 15, to pensioners.

“We believe we have to create some sort of succession and inspire people to do the same as us.”

Discussing her role on the committee, she said: “I tend to be the one who’s very enthusiastic and can ‘climb any mountain’ even when it’s clearly unclimbable while Janet is more pragmatic and will say, ‘we can only do what we can do’.”

Mrs Hurst, of Nun’s Acre, said: “Stephanie drives the Bloom group. She enjoys ringing them up and harassing them for things, which I don’t particularly enjoy. My job is more to come up with ideas for particular projects.”

“In affluent areas, people’s time is often very, very precious and while they’re incredibly generous with money, their donations of time are more important for the Bloom group. We’re really pleased that they’re taking part and look forward to what they will show us.

“The volunteers look at every inch of their community and try to improve it in a sustainable way.”

The team were shown planting wildflowers at the BT exchange building off the Wheel Orchard car park and installing planters with scented flowers such as sweet peas outside the neighbouring public toilets.

They also planted climbing species and shrubs beside the wire fence along the footpath to High Street.

The group had also hoped to plant trees and shrubs on the eastern embankment at Goring station, where the platform had been extended.

However, they found it was made of concrete scalpings so wasn’t suitable. They had to seek permission to add a layer of topsoil but weren’t able to start before Mr Bartle and fellow judge Paul Almond visited in July. Instead, they explained the situation and showed them artists’ impressions of the finished scheme.

The judges then toured the village centre and Withymead nature reserve before taking a boat trip on the River Thames.

The programme then showed photographs of the team picking up their gold certificate at the awards ceremony in September.

Mrs Bridle, who watched the show with her husband, said she was contacted by several other towns and villages for advice afterwards and also received an invitation to lunch with Sir Nicholas Bacon, the RHS president.

She said: “My initial thought was that Goring looked great, which is the most important thing, and it’s what a lot of others told us afterwards. People commented on how well we work as a team and said they didn’t realise how much work goes into it.

“It was very poignant seeing Gareth on screen because he died so soon after it was shown. He was a tremendous mentor to us and had a wonderful sense of humour so we will miss him greatly.”