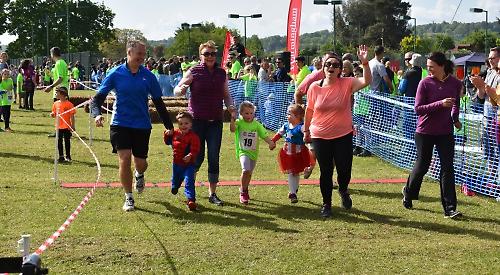 A BOY notched up a hat-trick of victories in Goring’s Hairy Legs challenge.

Alexander Darbishire, 12, won Teenage Kicks 1 for children in school years 7 to 9 having previously won the Little Legs 2 race for children in years 4 to 6 last year and the year before.

He was one of about 500 people who took part in this year’s event, which included four children’s categories as well as the main race.

The races started and ended at Sheepcot recreation ground, off Gatehampton Road.

The teenagers and adults headed south to the end of Gatehampton Road before following the bridleway through Great Chalk Wood and returning via Reading Road and the Whitehills burial ground.

Every entrant had to negotiate the “circle of doom”, which comprised two interlocking spiral paths marked out with fence posts and hazard tape.

Alexander, of Reading Road, Goring, ran the 6km circuit in 25 minutes and 14 seconds.

The Abingdon School pupil said: “I like doing the races at Hairy Legs because they’re fun and I’m competitive so I enjoy racing against other people.”

His brother William, 10, who attends Goring Primary School, won Little Legs 2, crossing the line just a second ahead of Fraser Cox. Last year he finished runner-up to his brother.

The boys’ father Owen said: “I’m proud of them both. Their times are phenomenal as it’s a very hilly route and one of those hills is particularly nasty. Considering how tough it is, they’ve done fantastically well.”

Children taking part in the Little Legs races ran several laps of the field while negotiating obstacles such as hay bales and tractor tyres accompanied by a mascot dressed as a panda.

Little Legs 1 for years 1 to 3 children was won by Joshua Sudbury, who finished nine seconds ahead of the first girl Riona Street.

The winner of Teenage Kicks 2 for children in years 10 to 13 was Rhydian Watson, who finished in 28 minutes.

The winner of the main race, which comprised two laps, was Ben Sumner, 24, who finished in 50 minutes and 30 seconds.

He has represented Great Britain in Cyclocross but had never run competitively before and only signed up for the race a few days beforehand.

He said: “I’ve been spending most of my time in the pub recently so I have been running to keep the beer belly off. It was tough.

“The first time I did the hill I just put my head down and didn’t look up as it was absolutely miserable. Going into the second lap, I thought I had overdone it because I’m not used to this kind of distance. I was really suffering but I managed to pull through.”

Will Winter, from Cambridge, finished second in 51 minutes and 48 seconds while the fastest woman was Amber Gascoigne, from Reading, who finished in 53 minutes and nine seconds.

The proceeds will be shared between Goring and Streatley primary schools.

Race director Jodie Brinson said: “We couldn’t have asked for a more wonderful group of runners and supporters or for better weather.

“There has always been a good community spirit but this year it seemed especially strong.

“It’s a very challenging race, especially for those doing Teenage Kicks 1, because that’s a huge leap up from the children’s race.

“Considering the hilliness of the route, it’s incredible that Alex finished in 25 minutes and I think that’s going to be tough for anyone to beat in future.

“We’d love to see more clubs involved because it’s a tough course and there’s a massive sense of achievement in finishing it.”

Hairy Legs was launched in 2002 as a cycling and running duathlon but was cancelled about a decade later after Oxfordshire County Council withdrew its support.

It as revived purely as a running event in 2015.