Hundreds of families attend school fete thanks to warm weather 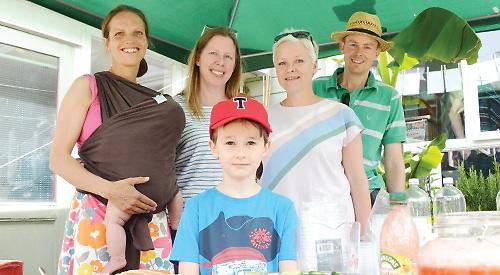 Organisers of the annual event, which took place at the site off Wallingford Road on Saturday afternoon, hope to have raised more than £5,000 towards a new school minibus.

The school orchestra and teacher Elizabeth Parkinson, who conducted, opened the fete with a short performance in the sports hall which included It’s A Long Way To Tipperary and Supercalifragilisticexpialidocious from Mary Poppins. They were watched by a crowd of about 70 parents and took a bow afterwards.

Stalls were set out in the school grounds offering face-painting, toys, second-hand books and plants. There were also fairground games and activities including splat the rat, hook-a-duck, a coconut shy, a bouncy castle, football games, a raffle and a cuddly toy tombola.

Parents ran a barbecue and bar while children ran a stall selling healthy snacks from the school’s kitchen garden. There were also performances by the school choir and gymnastics teams.

A silent auction was held with prizes including golf lessons, exercise classes, beauty hampers and a meal with wine at the Miller of Mansfield in Goring high street.

Penny Taylor, of the school’s parent-teacher association, said: “We don’t count numbers but there was a real buzz and it seemed to be exceptionally well-attended, both by pupils and the wider community. The weather helped, as did the fact that we rearranged the stalls and introduced the silent auction.

“The children always look forward to it and the previous year’s leavers always return. It’s a nice safe environment where they can run around with their friends and spend a bit of pocket money on some toys. There’s a lot of effort involved in putting it on so we’re extremely grateful to everybody who gave their time.”