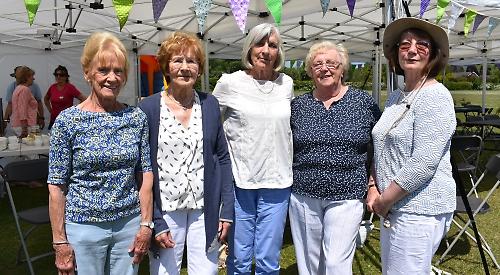 They took part in exercises and drills on the courts at Sheepcot recreation ground off Gatehampton Road and were able to purchase tennis equipment. The activities were led by the club’s head coach Jon Howey.

Children could play on a bouncy castle and the afternoon wrapped up with tea and the cutting of a cake in the shape of a tennis court made by by Karen and Terry Walker, the club’s longest-standing members.

Chairwoman Anthea West said: “It went so incredibly well. The high turnout made it extra special, particularly with the large number of young people who took part.”

The club was founded in 1968 by a small group of enthusiasts who would play on the courts at each other’s houses, then at Upper Basildon and Mapledurham.

They were given permission by the parish council to build four courts at Sheepcot rec in 1973 and then raised the money needed. The cub added a fifth court in the Nineties and built a clubhouse in 2003. This was refurbished two years ago.

The club now has more than 250 players of all ages and abilities. Mrs West, who joined with her husband David in 2001, said: “I really enjoy it. I can’t say it has been without its challenges but it’s a wonderfully friendly club that plays in beautiful surroundings. Our head coach is highly experienced and does a good job of keeping our more mature players coming regularly.”

The celebrations will continue with a dinner dance at Goring and Streatley Golf Club on October 13.