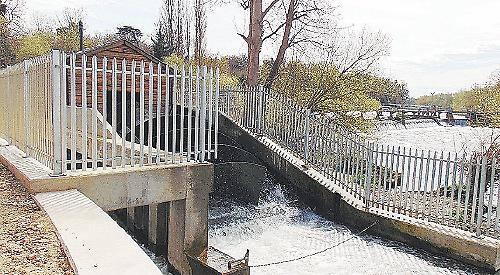 GORING Parish Council has defended its decision to spend more than £30,000 of taxpayers’ money on fighting plans for a hydro-electric power plant.

It made three legal challenges to South Oxfordshire District Council’s decision to approve the scheme, which all failed.

However, the parish council insists there was strong support for the challenge and no one opposed it at the time, although two villagers criticised it at the council’s annual meeting in May.

A final report prepared by the council’s weir committee, which has now been disbanded, said the total cost per household over three years was less than 50p per month.

Councillor Bryan Urbick, who wrote the report, said there was good reason to think the action would succeed and the campaign of opposition had helped to highlight flaws in the district council’s planning process.

He said: “Although none of us loved the idea of spending public money, we felt it was important to stand up and fight to protect the village from a flawed decision. We worried more about what would happen if we didn’t.

“After considerable reflection, I would encourage us to continue not to be afraid if we are again faced with a decision to stand up for our community and if necessary to invest in that decision.

“There have been requests that we should indicate that we would never do something like this again.

“I personally have difficulty in that because it is impossible to know what will happen in the future and it is inappropriate to pre-determine future councils’ decisions. I believe we approached all decisions with as much objectivity as we could and with expert legal advice.

“We knew we might not win and managed the costs as best we could — and kept within the limits we could recover if we won.

“It’s easy to be critical in hindsight but, based on the information and advice we received at the time, I would probably make the same logical, well-considered decisions.

“It is difficult to put one’s head above the parapet and take a stand but we did, for the right reasons, and for that there is nothing to be ashamed of.”

The plan for the weir on the River Thames to the north of Goring bridge was put forward by the Goring and Streatley Sustainability Group in 2016 after years of discussion.

The group intends to build three 12ft-wide Archimedes screws with a turbine and generator, which it says could power about 300 homes for a year. The power generated will be sold back to the National Grid under the Government’s feed-in tariff scheme and the proceeds spent on environmentally friendly projects in the area.

Opponents claim it will spoil views of the Chilterns Area of Outstanding Natural Beauty and reduce oxygen levels in areas where fish breed and could also generate noise.

Shortly after permission was granted, the parish council warned it planned to take legal action, claiming the district council had failed to properly consider the impact on the landscape or the impact on nearby listed buildings.

It said it was “irrational” for the district to say the scheme would impact on Goring conservation area but not affect the Chilterns Area of Outstanding Natural Beauty.

The parish council took the case to the High Court, which accepted the district council hadn’t followed the correct protocol but said this didn’t affect the final outcome.

It then appealed but the Court of Appeal ruled the High Court’s decision was “inevitable and unimpugnable”.

The parish council made one final challenge using a rare procedure where appeals can be re-opened “to avoid real injustice” but a panel of three judges ruled against it.

As a result, the council had to pay £6,700 towards the district council’s legal costs.

Critics said the council should simply have complained to the Local Government Ombudsman.

Work on the hydro project is yet to start. The sustainability group declined to comment.

• A resident has complained to Goring Parish Council’s external auditor over its handling of the appeal. The unnamed villager claims the final court action was unlawful because the council didn’t call an extraordinary meeting to approve the expenditure. The council is awaiting the auditor's response. It said the cost of processing the complaint would be between £750 and £1,500.