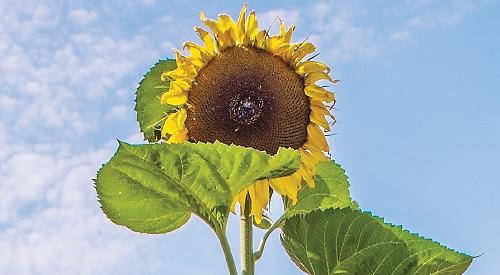 A WOMAN from Goring received a bouquet of sunflowers after winning a competition organised by the Goring Gap in Bloom committee.

Diana Monk, of High Street, paid 50p to guess which of several sunflower seedlings would grow the tallest at the group’s annual fund-raising plant sale in Rectory Garden in April.

The plants, which had alliterative names like Massive Martha and Wonderful William, were then planted at the side of the footpath off the Wheel Orchard car park by Ron Bridle, whose wife Stephanie chairs the committee. Mrs Monk’s specimen, named Big Bertha, seemed to enjoy the unusually hot and dry summer as it grew the tallest at more than 3m.

Mrs Monk, 91, said: “It was just a bit of fun and I’d forgotten all about it until Stephanie rang me to tell me I had won.

“It feels like a bit of a cheat because I understand that another sunflower has since had a spurt and grown even taller than mine but mine was biggest at the time!

“The bouquet was a lovely surprise and it reminded me of when I was nine years old and grew a sunflower with my sister June.

“We paid 6d for the seeds from Woolworths and I still have a picture of me standing on a chair with a rake holding it by the head.”

Mrs Bridle said: “Those sunflowers have carried on growing since we announced the winner and they’re an amazing sight.

“They’ve provided some seeds for the local birds and lots of people stop to take photographs and ask us about them.

“It’s amazing given the shallow and poor soil but I’m wondering whether we might have to fell them soon as a health and safety hazard because of their size.

“We will definitely keep some of the heads because they’re the width of dinner plates.”

The sunflowers were planted as part of Goring’s entry into this year’s Britain in Bloom competition. The results will be announced on September 26.

Judges visited in July and were given a tour of the village, including a newly-planted earth bank at the station, the edible garden at Goring Primary School and Withymead nature reserve.

Since its first entry in 2012, Goring has won three gold awards and two silver gilts in the small town category of the Thames and Chilterns region.