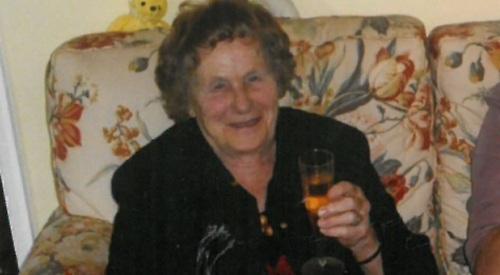 SHEILA Mae Collis-Rudge was born on October 14, 1925, in Evesham, Worcestershire.

The eldest daughter of her parents Rivett and Beatrice Guise, she grew up with her brother Peter at The Cottage, part of the Abbey Manor estate.

She attended the Alice Ottley School in Worcester and at the outbreak of war the family were evacuated to a log cabin on the Wood Norton estate.

Wood Norton had been bought by the BBC in 1939 so that it could relocate its operations away from London and the other urban centres in the event of hostilities. Sheila did her bit during the war by joining the Land Army.

After the war, the family returned to The Cottage, which is situated on the banks of the river Avon and, with the help of her parents, set up Riverside Riding Stables with several horses. Her favourites were Molly and Rupert who both lived happily into old age. She met her future husband, Brian Collis, while he was working on the Abbey Manor estate and they were married on September 20, 1952, and moved into their first house at 37, Green Hill, Evesham. She gave birth to her first son, David, in 1954, followed by Simon in 1957.

In 1960, due to Brian’s promotion to sales manager, the family moved to Collingwood in what was then Crowsley Road (later Baskerville Lane), Shiplake.

Both Sheila and Brian were great animal lovers and soon the house was filled with three cocker spaniels and a dalmatian.

Sheila learnt to drive in 1967 and this opened up several new opportunites for her and she became very active in several sports including tennis and badminton, which she continued to enjoy well into her 80s.

She served as chairman of Shiplake Tennis Club and she was also an active member of the Shiplake Women’s Institute, regularly playing Jerusalem on the piano before their meetings and served as president.

Sheila lost her husband Brian at the tragically early age of 62 on May 15, 1987, and having earlier moved from Collingwood to Sandpipers in Northfield Avenue, Shiplake, then moved to Badgers in Heathfield Close, Binfield Heath.

Here she again showed her love of animals and was involved in raising money for an operation for a dog that was going blind and belonged to the owners of the local shop.

She was also active in the community by undertaking to drive residents to hospital appointments and, on occasion, even to Heathrow Airport.

Sheila married her second husband, Eddy Rudge, on September 13, 1996, and they enjoyed many happy years together travelling the world until his death on September 6, 2010.

Having been very healthy all of her life, Sheila started to suffer from dementia and moved to The Grange at Goring on October 13, 2016.