Cyclists in three-day Alps ride for girl’s back surgery 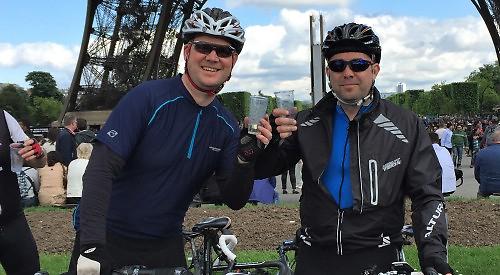 TWO men from Goring are to cycle up six peaks in the Alps to raise money for a girl’s spinal surgery.

Barney Kent and Andrew Markham are undertaking the three-day, 308km challenge in aid of Orla Astles-Jones.

The 12-year-old suffers from scoliosis and kyphosis, which mean her spine is bent and she has had to give up sport and dancing.

Orla, who lives in South Stoke with her mother Nicola and brother Tristan, 16, is to have a brace fitted to the lower half of her backbone to correct the curvature of her spine.

The procedure will be carried out privately by a specialist in London on September 30 and will cost £35,000.

Mr Kent and his wife Lindsey, who live in Mill Road, know the family as their younger daughter Ava, 11, has been friends with Orla since they were toddlers and both girls went to Goring Primary School.

Mr Kent, 44, was going to take on the challenge anyway so decided to raise money for Orla in the process and will be joined by Mr Markham, 49, of Springfield End, as the pair have been cycling partners since they met while commuting to London from Goring station.

They rode from London to Paris in 2015 for charity and were due to take part in a four-day cycle through the Alps in 2017 but Mr Markham had to pull out due to a knee injury so Mr Kent did it alone.

Their new challenge will take place from September 25 to 27. They will ascend a total of 6,568m in height on the slopes of Alpe d’Huez, Col de Ornon, Col du Festre, Col St Jean, Col de L’Homme Mort and Mont Ventoux, which is known as the “giant of Provence” as it is 1,912m and part of the Tour de France route.

They will ride for about eight hours each day, accompanied by a support crew who will feed them and carry extra clothes for when they reach the summits, where the temperatures are below freezing.

Mr Kent, who is chief executive of a medical education firm, said: “Orla was Ava’s first ever friend so I wanted to help.

“I was already signed up but wasn’t supporting any cause and it seemed crazy not to make the most of that opportunity.

“Cycling is my passion and I’ve done one of these trips before so I know it’s pretty extreme. It’s going to be hard — my last Alps trip was longer in terms of days and distance but climbs like Mont Ventoux are going to be interesting.”

He has been cycling up to 150km per week for his training.

Mr Kent said: “Luckily, Goring’s surrounded by hills so you’re facing a slope whichever way you go and I’ve been doing some training on Streatley Hill, which is pretty steep.

“The slopes on the Alps won’t all be that sharp, so it will be a case of sustaining a rhythm over many hours rather than gritting your teeth and powering to the top as quickly as possible.

“I’d be feeling more confident if I hadn’t just been on holiday drinking and eating more than I should but I tell myself I’m just carb-loading. I’ve got three more weeks to get back on top of training.

“I’m really excited about it but also apprehensive. You’d think the climbs would be the worst part but it’s also the cumulative impact — you can do 100km in one day but then repeating it twice more is a pretty big task.

“The descents will be tough as well because of the cold. People have this idea that you can freewheel down each mountain easily but the wind chill is a serious danger.”

Mr Markham, who runs a sports marketing business and is also friends with Orla’s family, said: “I’ve been trying to do at least 100km of training a week. I’m feeling pretty confident, although I’m slightly daunted by the elevation.

“I think it’s going to be exhilarating with all the mountain views and, of course, it’s for a good cause.

“I know that Orla desperately needs the operation and I’m pleased that we’re able to help in some way.”

Orla’s family have so far raised more than £16,000 after another family friend, Jodie Brinson, from Goring, completed the 100km Race to the Stones “ultra marathon” from Lewknor to Avebury in Wiltshire in July.

Her father Olly, who lives in Birmingham, is to take part in a running, cycling and kayaking challenge in the Outer Hebrides later this year and there is to be a non-uniform day at Langtree School in Woodcote, which she now attends.

Mr Kent said: “It has been a real roller coaster for Orla’s family. Her condition is progressive but she has taken it in her stride and and her mum has done an amazing job in finding the best treatment for her.”

To make a donation, visit www.gofundme.com/orla-new-spine-tour