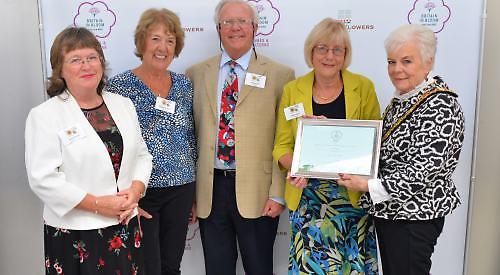 THE organisers of Goring’s award-winning entry into the Britain in Bloom competition say they are delighted.

The village won its fifth gold award in the Thames and Chilterns region and was named best small town after achieving the highest number of points in the category.

It also won the regional award for community involvement in recognition of the “sunflower shower” project by artist Rosemary Brook, who encouraged villagers to make model sunflowers from recycled plastic goods.

These were displayed around the town and some were sold at the Goring Village Greenfingers gardening club’s summer show in August. Goring Primary School was highly commended in the Mark Mattock Schools Challenge section for its courtyard garden where it grows fruit, vegetables and herbs to sell to parents or use in school meals.

The judges were given a tour of the village in June and the results were announced at a ceremony in Woodley last week.

The panel said: “A visit to Goring never fails to impress and demonstrates what can be achieved when the community works together. The team work tirelessly throughout the year to develop new initiatives that make a real difference to residents, businesses and visitors alike. The tour showed an excellent standard of high-quality horticultural achievement. Care for the local environment, pride of place and community involvement were abundantly evident.

“Goring continues to develop from strength to strength and is a credit to all involved.”

This year volunteers planted and installed 45 hanging baskets as well as troughs and planters and carried out a number of community projects including the installation of a wildflower mural at Goring station by artist Sarah Pye.

Stephanie Bridle, who chairs the Goring Gap in Bloom committee, said: “It’s a great achievement and it’s mostly down to team spirit, with everyone working towards the same end. We have a committed and energetic team who are all very positive and get on well. They’ve put in a lot of work and made a big difference.”

Since it first competed in 2012, Goring has also won two silver gilt awards. This year it was also inspected for the national competition and the results will be announced at a ceremony on October 25.

Mrs Bridle said: “I honestly don’t know what to expect so I’m not counting on anything. I’m just looking forward to the occasion and we will see how it goes.”