Firefighter who still loves the job after 25 years 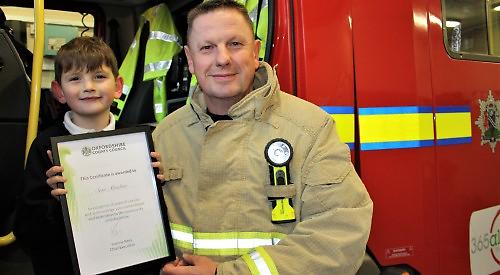 THE watch manager at Goring fire station has been honoured for completing 25 years’ service.

Sean Absolom joined Oxfordshire Fire and Rescue Service as an on-call firefighter in 1994 and initially served in Wallingford, where he grew up, and Kidlington.

He switched to Goring fire station in Icknield Road four years later after accepting a regular job in the village as a carpenter.

He was promoted to leading firefighter soon afterwards and was made watch manager in 2004.

Mr Absolom, 55, who lives in Iceni Close with his wife Sue and eight-year-old son Charlie, has to be based near his workplace so that he can quickly be dispatched in the event of an emergency.

He says he loves the job despite the long hours and constant battle to attract enough crew members.

He had always wanted to join the fire service because a colleague of his late father was a firefighter so he understood the importance of the job from a young age.

He said the selection process was not particularly difficult but he had to quickly learn a lot of new skills.

Mr Absolom said: “It opened my eyes to a lot of things. My family all thought it would only last a couple of weeks before I’d see something nasty and that would be that.

“However, that’s far from the case and I honestly don’t know what I would do without it in my life.

“I know my time is running out but I’m going to keep going for as long as I can.” Over the years, he has attended all kinds of incidents ranging from fires, road traffic accidents and rescues on the River Thames to minor domestic situations, such as rescuing children whose fingers have become stuck in doorways and helping to find pet hamsters that have escaped.

He was present at the huge fire which destroyed South Oxfordshire District Council’s old offices at Crowmarsh Gifford in 2015 and the collapse of an old boiler house at Didcot power station, killing four workmen, the following year.

Early in his career, he attended a fire at the power station in which he and his colleagues walked about 60m into a burning building while wearing breathing apparatus.

“It has been a really varied experience and this is such a great organisation to be part of so I would encourage anyone to give it a go.

“Your first time out on the truck can be quite scary because you don’t know what you’re going to, but your training kicks in and you get into the swing of it.

“With enough experience you don’t get nervous any more but just deal with whatever crops up to the best of your and your crew’s ability. As your skills increase, you become highly adaptable. My most rewarding experience was a few years ago when I bumped into an elderly gentleman who I’d I helped to cut free from a road collision a few months earlier.

“He was in a terrible way when they took him to hospital and I wasn’t confident that he would be all right.

“However, he came up to me at that summer’s Woodcote Rally and said, ‘You don’t remember me, do you?’

“I stared blankly at him and he explained that I’d saved his life.

“It’s amazing to know you’ve made that difference and that he remembered me after everything that happened.

“I actually feel pretty emotional thinking about it now. I’ve saved lots of lives but that one sticks with me.”

Mr Absolom was presented with a plaque and gift vouchers during a ceremony at County Hall in Oxford earlier this month.

He says he is proud to wear the uniform because it attracts the public’s respect and he enjoys leading his crew, which comprises seven officers, although he would like twice as many.

He typically spends more than 100 hours a week on call.

As well as attending incidents and their weekly drill nights on Wednesdays, the firefighters visit local schools and public events to show off their engine as well as educating the public on fire safety.

During this year’s Children in Need appeal, the crew raised more than £4,000 through a bucket collection from drivers crossing Goring bridge.

Mr Absolom said: “It’s fun but challenging. I don’t see myself as the leader, just one of the crew who happens to be in charge.

“I’m not someone who throws their weight around, although my colleagues know when they’ve given me the hump.

“I’m proud to have served for 25 years and amazed at how the years have shot by. It wasn’t until the ceremony that it really sank in how long it is. It was never a target I aimed for — I’ve just stayed because I love the comradeship.

“Turning up for drill is like my team game that I get to play at the end of the working day.

“One of my older colleagues says he has played all sorts of team sports but there’s nothing better than this. I completely agree because you come to rely on each other 100 per cent.

“It’s also a great way to earn some extra money. We really struggle to shake off this myth that we’re unpaid.”

Mr Absolom says his family supports him and his son takes a keen interest in firefighting.

He said: “Charlie is very proud and spends a lot of time at the station so he knows his way around.

“He probably knows far more than most eight-year-olds and we have to stop him from butting in whenever we visit his school.”

For more information about becoming an on-call firefighter, visit www.oxfordshire.gov.uk