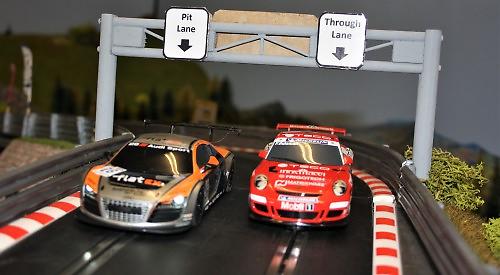 A RETIRED civil engineer from Goring hopes to raise money for charity by hiring out a large Scalextric race track he built in his garden shed.

Ron Murray, 61, spent about three years creating the model track, which consists of more than 110 loose pieces that he bought at a sale at the Sue Ryder hospice in Nettlebed.

The retired civil engineer had been building model railways as a hobby and wanted to create something similar to raise money for Parkinson’s UK as his wife Gillian was diagnosed with the condition several years ago.

The couple have previously hosted breakfasts and second-hand sales in aid of the charity but Mr Murray felt the race track would be more appealing to families with children.

They can accommodate parties of up to eight people who can race the model cars for two hours at a time in the evenings or at weekends in return for a donation.

The Murrays hope to raise at least £2,000 before selling the race track on eBay to make some more money.

The 1:32 scale track, called the Goring Slot Racing Circuit, measures 28m from start to finish and has an area of 7.5 sq m.

The cars travel at a scale equivalent of more than 160mph around the course, which features an uphill and downhill slope with hairpin bends and two tunnels.

There are four crossover points where faster racers can overtake slower ones.

The track also features miniature stands filled with spectators, overpasses and underpasses, a bridge made with bicycle spokes and cliff faces and waterfalls carved into painted modelling foam.

Mr Murray also installed dozens of lampposts with LED bulbs and the cars have headlights so he can simulate driving at night.

He came up with the design after watching YouTube videos. He used plywood stuffed with old plastic bags, then covered the hills in artificial grass made from nylon as well as more than 500 fake trees.

He installed sensors on each track tile which are hooked up to a computer system that displays a leaderboard and can automatically control a pace car to compete against players.

He bought an app online, which runs on an old laptop and simulates fuel tanks for each car so players must make a pit stop and “refuel” every six laps or so.

Players take part in practice and qualifying races before the main competition. The overall winner and the player who completes the fastest lap will receive a certificate.

Mr Murray operates a leaderboard for those who set course records. He is currently top after finishing a lap in 11.74 seconds. During races, his wife retrieves cars which fly off the track when they go too fast.

Mr Murray, who worked in the energy industry before retiring five years ago, said: “When I saw what other people had done online, I realised I could do something similar with my modelling skills. I wanted to make the best possible use of space and include lots of exciting features.

“It took a while to finish as I was fitting it around my part-time job at Goring Hardware and some consultancy work but I probably put the full-time equivalent of a year into it.

“The basic track didn’t take long but the real effort was in the scenery and the electronics. I was very tempted to keep tinkering with it but in the end I realised I had to just get it working and open it up.

“I had to sort out quite a few problems with the computer systems over the summer and got a friend who’s an expert to sort it out. It was a pretty involved process involving oscilloscopes and all sorts but we got there eventually.

“I suppose being an engineer helped me to approach that in a logical manner — I’m a civil engineer but along the way I learned a lot about electronics. I felt very proud to complete it and enjoyed the process as it was challenging and sometimes frustrating but always engrossing. I’ve looked online and I think it stands up well against other people’s designs.”

He says he will miss the track once it has been sold but will start another railway project.

“I’ve seen them going for more than £1,000 on eBay so hopefully the sale will contribute a lot to our final takings.”

He said the feedback so far had been positive and the couple’s daughter Alice, 33, enjoyed testing out the track when she visited with her husband.

“The comments included ‘epic’ and ‘awesome’,” said Mr Murray. “I think people are very impressed when they first see it, especially children. The younger ones have a short attention span so I don’t spend much time talking about it as they just want to get racing.

“I’ve noticed that men get pretty competitive, especially for the fastest lap. You see the odd squabble about who had an unfair advantage.

“I’ve seen some pretty good driving, too, and from children as well as adults. Although there’s a stereotype about boys and racing cars, we had a 10-year-old girl driving very impressively so there’s no real gender advantage. It’s very simple and accessible.

“I’ve been very gratified by the feedback — it’s great to have reached a different audience from our previous fundraising events and we’re pleased that it has caught people’s imagination.”