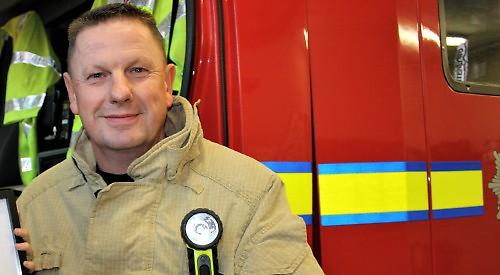 Just seven officers are now based at the village station in Icknield Road and at least twice that number is needed to ensure the workload is shared fairly.

The firefighters are employed on an on-call basis so they live or have regular jobs in the village which they leave when they are summoned to an emergency.

They attend a range of call-outs from fires, road accidents, river rescues and major disasters to domestic incidents where people or animals have become trapped. Watch manager Sean Absolom, who lives in Iceni Close, typically spends more than 100 hours a week on call to ensure there is enough cover.

The 55-year-old, who was recently honoured for completing 25 years’ service, says it is a rewarding job and a good way to earn extra money so anyone who can spare at least 40 or so hours a week should get in touch.

As well as attending incidents and their weekly drill nights on Wednesdays, the firefighters visit local schools and public events to show off their engine as well as educating the public on fire safety.

They are a regular fixture at Goring’s late-night shopping festival in the run-up to Christmas and also appear at fetes and fairs in neighbouring villages throughout the summer. The team raises thousands of pounds annually for the Children in Need appeal by holding a bucket collection on Goring bridge.

Mr Absolom said: “This is such a great organisation to be part of, so I would encourage anyone to give it a go. It’s fun but challenging.

“With enough experience, you don’t get nervous any more and deal with whatever crops up to the best of your ability. As your skills increase, you become highly adaptable.

“One of my colleagues says there’s no better ‘team sport’ than this and I completely agree because you come to rely on each other. It’s also a great way to earn some extra money. We really struggle to shake off this myth that we’re unpaid.”

Candidates must be over 18, live or work within five minutes of the station and be able to respond immediately when needed.

They must be able to pass basic tests of both strength and fitness and show they are not afraid of working at height or in enclosed spaces. Where practical, they may choose to provide cover during the daytime, at evenings or weekends or a combination of the three.