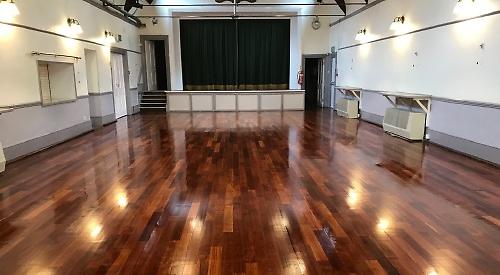 REFURBISHMENT of Goring village hall has been completed after a decade.

Trustees of the community building in High Street, which was built in 1900, say they have spent almost £500,000 on the project in order to make it more attractive for people to hire.

The back of the hall has been extended to create a new “garden room”, the main hall and smaller Bellême Room have been redecorated and the staging and lighting and the sound systems have been modernised.

In addition, the aging clock tower has been restored.

At the trustees’ annual meeting on Wednesday last week, outgoing chairman Bernard Novell thanked everyone who made the transformation possible through donations and fundraising.

The meeting was followed by a buffet supper and drinks. The guests, many of whom are regular hirers of the building, were given guided tours.

The makeover project was inspired by villagers Stephanie Bridle and Angela Clarke, who in 2009 organised a survey asking residents what improvements they would like to see. Suggestions included new toilets, better heating and more storage space.

The first of these was implemented under the previous chairman Alan Matthews before work started in 2012 on the garden room, which replaced a leaky store room. It has a new gas boiler and radiators.

The work also included a new patio and path from the side gate in High Street.

In 2013 the upstairs storage area was refurbished and six aging heater boilers were replaced. In 2014 and 2015 the trustees installed solar-powered electric windows and energy-efficient LED lighting in the main hall as well as wireless internet access.

The following year, the clock tower was restored as its wooden structure was rotting. Expert contractors were paid about £37,000 to replace the timbers and lead flashing then clean and regild the clock and its inner workings.

Since then improvements have included the redecoration of the hall’s three rooms, more LED lights in the smaller rooms, loft insulation, a new heating system and replacement of the main hall floor.

Last month trustees finished the final phase, which was a £58,000 overhaul of the main stage, including reinforcement of the floorboards, new safety railings and curtains, a sound system with a hearing aid induction loop and improvements to the backstage area. A small amount of asbestos was also removed.

Income from hirers dropped slightly due to brief closures of the hall while the work was carried out but was higher overall this financial year due to grants and donations.

There have also been scores of fundraising events including a “buy a brick” scheme, champagne raffles, music and drama performances, murder mystery nights and firework displays.

Mr Novell, a lifelong villager who joined the trustees in 2010 and became chairman in 2015, will be replaced by his vice-chairman Mike Baker but will stay on for another year to help with the handover.

He said: “After I retired, I wanted to put something back into the community I’ve lived in all my life but I always knew this would be a decade-long programme and I’d have to ease my way out rather than just leaving. I hope we’ve given you a hall that you can be proud of and will want to use. When you look at the packed houses for the jazz gigs or the comedy club, you realise we wouldn’t be attracting these events and enjoying such a rich cultural scene if we hadn’t done this work.

“We’ve really given it a new lease of life while preserving its character, which is part of its appeal. It has been an absolute godsend having people on board who really understand the electrics, the sound and other technological matters.

“We’re justifiably proud of what we’ve done because 10 years ago the hall wasn’t in a very good condition at all. There’s still more we could do but that’s always going to be the case and we’ve achieved a lot on our budget.”

Mr Baker said: “Since the refurbishment started, we’ve had so many comments that everything works well, it looks great and everyone wants to come and use it. I can’t think of anything that hasn’t been updated in Bernard’s time and he’s going to be a hard act to follow.”

Mrs Bridle, who is chairwoman of the award-winning Goring Gap in Bloom initiative, brings judges from the Royal Horticultural Society to the hall for lunch when they inspect the village every year.

She said: “I think the trustees have done a brilliant job. It looks perfect and is commensurate with the quality we’ve come to expect in Goring. It’s a great asset to Goring and an example of how working together as a team can get the results you want.”

The hall was designed by architect Percy Stone, who lived in the village, and built by Goring builder Thomas Higgs & Sons. The clock tower was commissioned in 1925 and the annexe was added in 1938 and later named the Belleme Room after Goring’s French twin town.

The latter is thought to have been funded by the Palmer family, of Reading biscuit company Huntley and Palmers, who owned a house in the village.