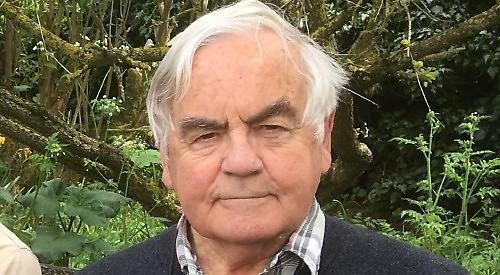 A MAN from Goring who has rung the bells at more than 300 churches across the south of England has given up his hobby.

Tony Laurence, 88, of Limetree Road, joined the band at St Thomas’s Church in the village in 1994, about two years after he retired from his role as a master mariner in the Merchant Navy.

He had never rung bells before but wanted a new pastime so he gave it a go and quickly learned under the guidance of Ian Judd, who is still the church’s tower captain.

The first two years were spent building up his fitness and learning the techniques, including swapping bells with other ringers at the correct time to produce complex patterns.

As he became more proficient, he would join his colleagues whenever they rang at other churches including St Mary’s in Henley, or were invited to inaugurate new bells at churches further afield.

The role also included ringing at St Mary’s in Streatley and St Andrew’s in South Stoke.

Mr Laurence rang a total of 72 quarter peals, which last about 45 minutes each and involve at least 1,250 changes.

He would often invite members of the public to look around the tower and explain his art.

Mr Laurence announced his departure at a recent practice session, saying that because of his age and having had a pacemaker fitted three years ago, he now found it too demanding physically.

Mr Laurence said: “I was getting old and sometimes I felt the bell ringing was getting a bit much as I would only want to ring once and then sit down. The team were very kind when I told them.”

He moved to Goring with his late wife Nicola, his childhood sweetheart, at the age of 38 following a 20-year stint in the Royal Navy in which he reached the rank of lieutenant-colonel.

He briefly worked as a researcher for sugar giant Tate & Lyle, which had offices in Pangbourne, before returning to sea for a 20-year stint in the Merchant Navy, serving mostly the shipping and oil industries.

Mr Laurence, who was widowed three years ago, said: “At 62, I was quite a latecomer to bell ringing and I suppose it’s a bit like riding a bike in that you don’t take everything on board as quickly as a child might.

“At the time, a lot of the old bell-ringers were dying out so they placed an advert in the Goring Gap News saying that replacements were urgently needed.

“I tried it out with another person from the village and it all went from there. I suppose I was attracted because it seemed like a nice social activity and I wanted to make a contribution to community life.

“It was difficult at first but it got better. It was great fun and I loved it because the people are so friendly. The hardest thing initially is just trying to control this huge quarter-ton or half-ton bell by pulling on a rope at the right time.

“You have to judge the strength of your pull correctly to make it sound and also get the timing right.

“Then there’s learning how to manoeuvre around others to ensure the changes are correct.

“It’s very demanding and similar to driving as your mind has to stay on the task. In some ways it’s even harder as you can’t even talk to the person next to you or allow yourself to think ‘what am I going to get from the shop tonight?’

“It takes a year to be able to do it safely and another to be accurate before you can get serious and start learning the patterns.

“I was confident after two years and for a long time I rang the big bell which acts as a ‘full stop’ at the end.

“It’s fun ringing in other villages because you often drive through them without having a chance to look at their churches and through that you learn about their history. I must have rung in most of Oxfordshire’s villages at some point.

“There’s a surprising difference between churches as well. It’s a real joy to ring somewhere with heavy bells which are well hung, like Henley, while Goring’s are exceptionally easy to learn on so a lot of bands come to borrow them.”

The other Goring bellringers held a special supper to thank Mr Laurence and presented him with a leaving card with a bell design.

He will continue in his other role of co-ordinator of the volunteer transport scheme at Goring community centre.

The bellringers, who rehearse for half an hour on Sunday mornings, are now seeking a replacement.

Mr Laurence said: “There’s an urgent need so anyone who’s interested will be welcomed and we’re lucky to have an exceptional tower captain who’s good at seeing when someone’s going wrong and getting them back on the right track.

“They’re all exceptionally lovely people, as I’ve found all tower bands are. It’s a very open and non-judgmental atmosphere and it’s good exercise as it’s a ‘pulling’ motion that doesn’t put pressure on your spine.”

Mr Judd said: “Tony could be relied upon to attend Sunday service to ring every week and also rang for weddings and funeral services.

“He will be sorely missed, not only for his ringing prowess but also for his good humour, occasionally interspersed with perceptive witticisms, all of which contributed to the convivial atmosphere of the band.”