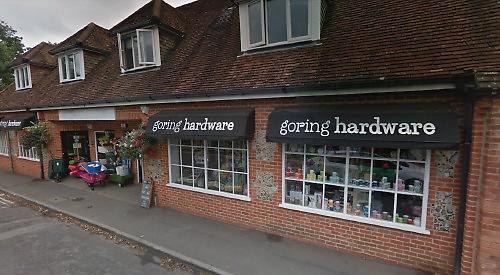 THE owner of a hardware store in Goring is selling the business after more than a decade behind the counter.

Tanya Brown took over Goring Hardware in Red Cross Road in 2009 and has since doubled its profits and tripled its turnover.

Now she wants to move on as her two sons have grown up and she wants to spend more time travelling with her husband Alan.

The couple were originally going to run the shop together as Mr Brown was taking a back seat from the corporate world but then he received a job offer which he couldn’t afford to turn down.

His wife decided to run it by herself and made a success of it despite having no prior experience in retail or the hardware sector.

Mrs Brown, 51, says she has focused on quality, affordable goods rather than high-end items and stocks more gift items alongside traditional tools and hardware.

She employed more female staff to increase the shop’s appeal to women while continuing to attract men and changed its working practices so that staff had more of a say in how it was run.

Mrs Brown, who has lived in Streatley for more than 20 years and has a background in catering, said: “I knew absolutely nothing about retail or hardware so the first few months were very tough.

“There was a pretty steep learning curve and I would come home feeling incredibly stressed.

“I’d been working as a gardener immediately before we took over but my back had gone so we were going to go into it as a partnership.

“It seemed like a logical step as Alan’s father Richard worked in power tools but then he got an offer he couldn’t refuse. However, I had some business experience from my catering days and it was very rewarding to learn something new. I discovered from my staff that people will step up if you give them more responsibility.

“I’ve brought a lot of feminine touches to what is traditionally quite a masculine environment, so a lot more women come here and feel comfortable about doing so. We’re well-known for having more ‘girly’ bits and bobs.

“The shop used to sell expensive items like Le Creuset cookware but now it’s somewhere you can pop in for a decent £30 kettle. I think people are more likely to go to John Lewis for higher-priced items.”

The shop was previously owned by Ian Dale for four years and before that Pat Voss ran it for about seven years.

Mrs Brown has had some expressions of interest but wants to sell the shop as a going concern and says she will wait as long as it takes for the right person to come along.

She said: “It has had a very stable ownership and I want to make sure it remains a community hub. It’s not just a shop but somewhere that older people can come for a chat over the counter and everything will continue as normal until it’s sold.

“The first thing I did was tell my staff because they’re an amazing bunch of people and I wouldn’t have wanted them to hear it from anyone else.

“I tend to downplay my role in things but I’ve obviously had some impact as people have been stopping me in the street to say they’re sorry I’m going. I’ve really enjoyed running it but it’s quite a commitment and I’m looking forward to a little more freedom.”

The building is owned by villager Richard Barnby, who ran the hardware store decades ago.