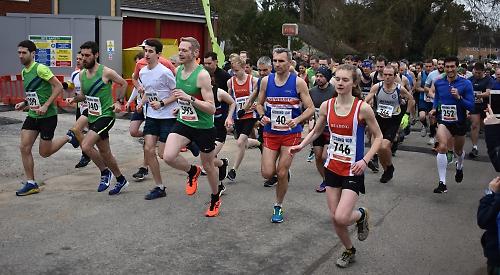 A WOMAN won this year’s Goring 10km race for the first time.

Jess Gibbon, from Rotherfield Greys, came home in 35 minutes and 55 seconds, exactly one minute ahead of the male runner-up Marcus Fletcher.

She was one of more than 500 runners who took part in Sunday’s race in aid of the village primary school.

Miss Gibbon, 23, who has just graduated from the University of Bath and works for its events team, has taken part in the event many times before.

She was the first female finisher last year and second overall.

This year she was near the front for most of the way but didn’t lead the race until more than halfway round.

Miss Gibbon, who usually competes in cross-country events for Reading Athletics Club, said: “I was pretty happy with the result. I’ve won overall at a few Parkruns but nothing like this.

“There were two guys ahead of me for the first 6km but I made my way up to them slowly and took them out.”

Miss Gibbon, a former pupil of Queen Anne’s School in Caversham, runs 35 miles in a typical week and supplements this with cycling and swimming as it keeps up her fitness while reducing the strain on her joints.

Last year, she set a women’s record at the Henley Parkrun after completing the 5km course in 18 minutes 41 seconds.

She said: “For me, the Goring 10km is just a good, fun race that I don’t have to take too seriously because it’s not the main focus of my running. It’s a tough course, especially when the wind’s blowing, but it’s very enjoyable.

“It was nice to get a few cheers of ‘girl power’ from the other women.

“It’s great to hopefully inspire girls and prove to them that you don’t always have to finish behind the boys.” Also taking part was Miss Gibbon’s father Adam, 53, who finished 63rd in 44 minutes and 44 seconds.

She said: “It has always been a nice tradition that Dad and I run it together. We’ve tried roping in other family members but they’re not so keen.

“Dad did pretty well considering that he hasn’t been training as much as usual. He used to do marathons but he has stepped back so he was pleased to still place near the top 60.”

Mr Fletcher, 29, of Oxford Street, Caversham, was taking part for the first time and was cheered over the line by his wife Rebecca with their two-month-old son Ned.

Mr Fletcher grew up in Henley and has been a keen runner since he was at Gillotts School.

He got into distance running about a decade ago when he moved to London, where he still works in the insurance industry. He now runs for the Reading Roadrunners. Mr Fletcher said: “It’s quite a hilly course and the weather was really windy so the overall conditions were very tough but I really enjoyed it and will definitely come back next year.

“It’s nice to do these local races because they’ve got a more intimate feel and in this case it’s also supporting a good cause. It was lovely to have our son there as well, although clearly he’s far too young to remember it.”

Among the first villagers to finish was Phil Woolfall, of Fairfield Road, who finished 18th in 39 minutes and 43 seconds.

Mr Woolfall is a regular supporter of the race as his sons Daniel and Harry attend the primary school.

He said: “Given the current situation, it was good to see the field was still pretty busy. I think there were quite a few entries from other events which were cancelled.

“The timing was right because they’d probably have needed to call the race off if it was a week later, which wouldn’t have been good as it’s the school’s biggest fundraiser.

“It’s a beautiful course in a gorgeous part of the world and I always enjoy taking part. It’s tough for everyone but a great social event for the whole community. It was inspiring to see Jess win so decisively this year.”

Also taking part was former RAF officer Jez Allinson, aka the “running stormtrooper”, who joins events around the country while dressed as the character from the Star Wars films.

He plans to run a total of 1,000 miles this year in aid of several children’s charities.

The race started outside Goring fire station in Icknield Road and finished on Bourdillon Field, where volunteers, including pupils from the school, gave out medals. Refreshments were on sale and finishers could also get a sports massage.

The organisers considered calling off the event because of the coronavirus outbreak but were advised it was safe to continue as long as nobody showing symptoms attended.

Race chairwoman Amber Rhind said: “It was really successful even if attendance was a little lower, which may have been partly down to the coronavirus outbreak.

“We had 750 entries and 522 actually took part where previously we’ve had more than 800 entries.

“We also had increased costs because we had to book extra portable toilets and buy more hand sanitiser but we should still have made a surplus to go towards a new library for the school. We’ve also had some positive feedback from people who attended or took part.

“It was fantastic to see Jessica win. Everyone was very excited and even before she finished I was getting loads of messages saying that a woman was leading the field. She has previously set a junior women’s record so she has always done herself proud at this race and we’re really happy for her.”