Girls collect £65 for charity helping to save the planet 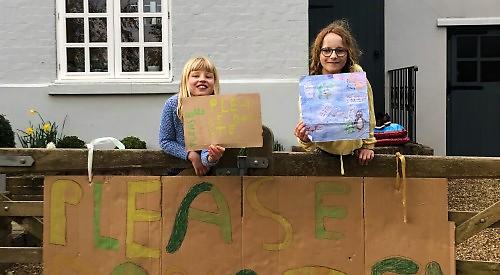 TWO girls raised £65 for an environmental charity by warning people about the hazards facing our planet.

Eliza Kemp and Anna Acworth, both eight, stood in the driveway of Eliza’s house in Hardwick Road, Whitchurch, while waving signs which they had painted on the sides of cardboard boxes.

They flagged down passing drivers and pedestrians to ask for donations to Plastic Oceans UK, which is campaigning to reduce plastic pollution in seas and rivers. They also explained how the problem is affecting wildlife.

The girls, who both attend Whitchurch Primary School, had wanted to organise the collection for some time as they are concerned about the planet’s future. They were supervised by Eliza’s father Peter, who took photographs.

Mr Kemp said: “They’ve been friends from the start of school and have always been very aware of the risks facing our planet as well as the steps which campaigners like Greta Thunberg are taking to improve the situation. They both avidly read things like National Geographic Kids and had been talking about this for quite a while because they wanted to make a difference. I wasn’t even aware until the day they did it.

“People were very receptive to the message, even when they weren’t local. The girls were very proud of how they did and I think they enjoyed the experience.”

Anna’s father Nick said: “Anna has always liked being creative and is interested in green issues so this was very important to her. She’s always talking to me about wildlife and asking questions about the sea, different types of whales and things like that.

“It was good that people were encouraging them. It’s a very friendly community here and everyone is very generous with their time.

“I’m very proud that the girls did something for a good cause off their own backs and without being told. It’s very admirable.”