Garden designer raises £1,500 for charity by selling boxes of fruit and veg 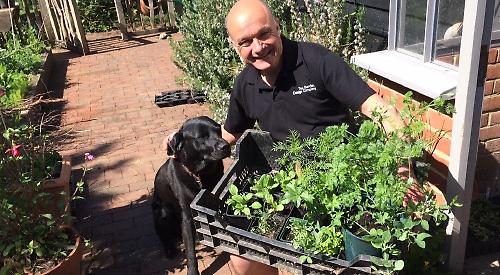 A GARDEN designer has raised at least £1,500 for a domestic violence charity by selling boxes of fruit, vegetable and flower seedlings for customers to plant.

Rob Jones, 59, of Manor Road, Goring, says the cause is important because many victims are trapped with nowhere to go while the country is locked down due to the coronavirus.

He grew the produce in his greenhouse while he was producing a series of daily educational videos for his Instagram channel.

He realised there was an increasing interest in horticulture once the restrictions were introduced in March so began filming short clips on growing different crops.

The videos, which hundreds of people now watch, cover the special challenges associated with each plant and suggest ways of tackling them.

Mr Jones has covered basic staples such as tomatoes, broad beans, runner beans, sweet peas, potatoes, garlic and courgettes and will also be talking about various flowers. After several weeks he had planted more than 1,000 seedlings so he devised the box scheme to get rid of them while raising money. He has sold 60 boxes at £25 each although some buyers have pledged more.

Proceeds will go to Berkshire Women’s Aid, which supports abuse victims and offers emergency accommodation as well as a 24-hour helpline.

Mr Jones, who lives with his wife Claire Rowe and their black Labrador Denzel, said: “I noticed people panicking about lockdown and saw one client planting beans individually in pots, which you’re not meant to do, and it occurred to me that a lot of people don’t understand the basics of gardening.

“It’s not realistic to expect people to sit through, say, a whole episode of Gardeners’ World so the short clips you can put on Instagram are perfect. I hadn’t really discovered the video side of the site until this all started. The production values aren’t high but people like it because they think ‘if Rob can grow that, then maybe there’s hope for us all’.

“I try to think ahead about problems like slugs and explain how people can head them off as it’s very disappointing when things don’t work as well as you’d hoped.

“I’m always thinking about the next set of videos so I can hold people’s hands on the journey.

“I’ve avoided anything too esoteric and just looked at the basics that everyone loves and is likely to want to grow. It’s taking off bit by bit and it’s interesting that more people watch when my dog’s in it.”

Mr Jones, who often holds small fundraising plant sales outside his house, selects the contents of each box himself and will ensure that future videos explain how to care for the plants as they get bigger.

He said: “I take all my payments online so there’s no handling cash and it’s a bit like buying a veg box as you don’t know exactly what you’re going to get. I’ve got a lot of seeds left and it’s still quite early in the year so I might try to eke out another batch.”

Mr Jones used to be a solicitor who often handled injunctions in domestic violence cases so still takes an interest in the issue.

He said: “Trying to keep women safe was a big part of my life and I despair that it’s still such a massive issue, especially at the moment.

“For the victims, the lockdown is a prison sentence or even worse. We’re very lucky to have our big gardens and high standards of living in this area but for those with nowhere else to go, the prospect of being locked in with an abuser is unbearable.”

Andrew West, the charity’s chief executive said: “I am thrilled to receive the unexpected and most welcome donation.

“We have recently seen a significant increase in the number of families seeking refuge and this is so heartening when we face such a hideous set of challenges.”

Anyone wishing to order a box should email admin@gardendesignco.co.uk