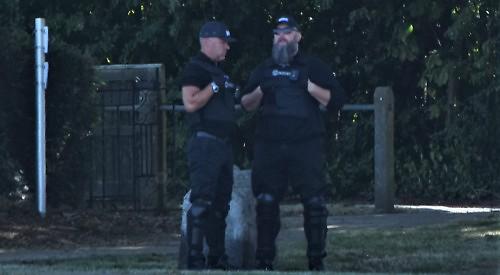 POLICE have been criticised for refusing to evict a group of travellers from a recreation ground in Goring.

Goring Parish Council, which owns the site off Upper Red Cross Road, served the group of 12 caravans with written notice to leave immediately after they broke in on Saturday afternoon.

It claims that police ordered the group to leave the site by midday on Monday.

However, when this deadline passed, officers chose to take no further action, saying it was a civil offence so was not their responsibility.

Police forces are permitted to do this where there is no evidence of criminal behaviour but parish councillors and residents say there was plenty.

The council now intends to make a formal complaint.

It had to hire a private enforcement firm which escorted the travellers off the Gardiner recreation ground in the village centre on Tuesday. The council said this was “broadly peaceful” apart from one altercation.

The cost of expelling them and clearing up the mess is expected to run into thousands of pounds.

The travellers, who were also driving cars and white 4x4s with Irish number plates, got on to the land by breaking one of the low metal railings and a concrete support post at the western entrance to the site in Cleeve Road.

They allegedly damaged the turf on both the main cricket field and the bowling green and left the area strewn with rubbish.

They were seen trying to remove the memorial benches which surround the bowling green but they failed to do so as these are chained to the ground.

They allowed their children to play on the green and adjacent playground, which the parish council has shut in order to prevent the spread of coronavirus. They hung their washing along a fence.

Some members of the group were seen ripping up fence posts and throwing them like javelins on the cricket green.

None appeared to be observing social distancing regulations. Passers-by who asked them to stop were met with verbal abuse.

On the first evening of their arrival the travellers held a party with loud music until late, which disturbed neighbours.

Throughout their visit, they were seen openly urinating and worse on the edges of the green as well as discarding rubbish in black sacks.

There were fears that they would attempt to burgle homes as some vans from the camp were seen speeding around the streets while occasionally slowing to a crawl past houses and peering into cul-de-sacs.

When challenged, the drivers shouted abuse and drove off.

Some of the younger travellers intimidated village children and threw water at them and it is thought that they tried to steal a bicycle from one child while they were riding it.

Police officers visited the site a number of times to talk with the travellers as did specialist liaison officers from Oxfordshire County Council.

It is believed that the families were part of a larger group which has been travelling around Oxfordshire and West Berkshire in recent weeks.

They have been seen in Wallingford, Sulhamstead, Tilehurst, Tidmarsh and Reading, where a large camp of at least 20 caravans was set up on Hills Meadow car park near Reading Bridge.

The parish council locked the gates at Sheepcot recreation ground off Gatehampton Road, which it also owns, while farmers on the village outskirts blocked access to their fields with heavy machinery.

Residents were urged to stay away from the site to avoid stoking tensions and the enforcers looked on as the families bagged up their rubbish and piled it in the middle of the field.

Parish councillor Bryan Urbick said: “I don’t know how long it will take to put right but apparently there’s a lot of damage to the cricket ground and bowling green.

“There have definitely been attempted thefts as some items on the field aren’t where they’re meant to be.

“There’s a lot of human excrement around the site and that has to be handled differently from regular waste because of the obvious health hazard.”

He said the council would complain to Antony Stansfeld, the Thames Valley police and crime commissioner, and ask Henley MP John Howell to take the matter up with the Government.

“Broadly speaking, the police didn’t think the situation was bad enough to intervene and I understand it’s not uncommon that they fail to exercise their duty under the relevant law,” said Cllr Urbick.

“We will be taking this further because it’s appalling that they can decide this when there’s evidence of breaking into and damaging property. I am really annoyed about it.

“I believe in tolerance of other people’s values and lifestyles but that group crossed the line. They were an antisocial nuisance and we had nothing but worries and complaints about them.”

Mr Howell said: “I’m not particularly pleased with the way that the police have acted and have raised the issue with Mr Stansfeld as I think it’s something that could be improved.

“We said in our manifesto that we would introduce legislation to deal with this kind of situation but after the election we were hit by coronavirus and haven’t had time to do much more about it.

“It’s a shame the Goring community had to deal with this and I take my hat off to the parish council for the work they did.”

Police would not confirm whether any crimes had been reported to them.