Large bill to pay for eviction of travellers 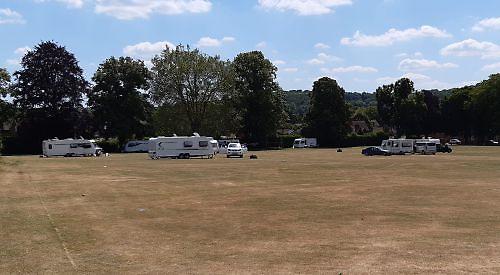 THE cost of evicting travellers from a Goring recreation ground and clearing up their mess will be at least £6,000.

Goring Parish Council, which owns the site off Upper Red Cross Road, had to pay about £4,500 to hire a private enforcement agency after police refused to evict the 12 caravans.

It has also had to pay £1,000 for a specialist cleaner to decontaminate the Gardiner ground.

There will be further bills when the council replaces the metal railing and concrete support post which the travellers smashed to access the field from Cleeve Road to the west.

It may also have to review and upgrade security arrangements at its other green spaces at Bourdillon Field, off Elvendon Road, Sheepcot recreation ground, off Gatehampton Road, and at the end of Ferry Lane.

Council chairman Kevin Bulmer says community projects might have to be scaled back or postponed to meet the final bill.

He and his colleagues are likely to file a formal complaint against Thames Valley Police for failing to act. They may also urge the Government to press on with plans to criminalise unauthorised camps, which are currently a civil offence.

The travellers broke into the site on the afternoon of Saturday, May 30 and the council immediately called police, whom they initially understood had served the group with notice to leave by midday on the following Monday.

However, officers took no further action when the deadline passed, forcing the council to come up with an alternative.

Thames Valley Police says no notice was issued but the council believes the force followed incorrect procedure, meaning it was issued but unenforceable.

The private enforcers escorted the families off the site on the Tuesday afternoon and they headed north towards Watlington.

Waste management firm Grundon donated two large rocks which were laid across the entrance to stop them coming back.

Councillor Bulmer, who represents Goring on Oxfordshire County Council, said: “I’d stress that we have no issue at all with the frontline officers, who spent a lot of time in the village and did a great job of keeping an eye on things. However, the senior officers either did issue a notice but didn’t do it the right way or they’re correct in saying a notice wasn’t issued when we expected it. Either way, it doesn’t look good.

“I’m almost speechless that they didn’t act considering that, forgetting the alleged crimes, the travellers blatantly weren’t social distancing when coronavirus is still a danger.

“They had family visiting them from other sites in Reading and we’ve also been given video of somebody being threatened with a crowbar.

“I think we did pretty well getting them off in just three days but it’s unacceptable that they get away with doing what they damn well like. The law comes down much harder on others when they break it.

“Goring parishioners have been left with a big bill through no fault of their own and it could have been far better spent. It could affect some of our projects and we still don’t know the final total.

“I’m proud of our clerk Laura White, who did a sterling job managing the situation and updating residents.”

Cllr Bulmer, who was there when the travellers arrived, said they used their own children to block police cars that were trying to stop more caravans arriving.

When the cricket club’s groundsman remonstrated with them for damaging the grass, a male traveller replied that he had just completed a 10-year prison sentence and didn’t care what anyone thought.

Cllr Bulmer said: “I don’t know if that was true but it shows how they felt about our community. They’re always demanding respect but arguably that’s a two-way street.”

Among many other complaints, it is alleged that the travellers verbally abused residents and threw water at children, held a late-night party with loud music, tried to steal bicycles and drove 4x4s slowly around the village while peering suspiciously into houses.

Police said they must balance the travellers’ needs with those of the community and in this case the situation wasn’t deemed serious enough for them to act.

Officers gave leaflets outlining a code of conduct to the travellers and attended the eviction.