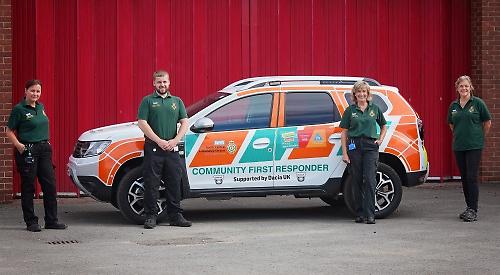 RESIDENTS and businesses in Goring helped to raise £35,000 for a vehicle for the village’s first responders.

It also has “alley lights” which shine from both sides to help the five responders when searching for house names and numbers at night.

The vehicle bears the logo and markings of the group, which has been going for many years.

Until now, the volunteers could only use their own cars to attend emergencies.

The responders, who are trained and managed by the South Central Ambulance Service, are “on call” around their regular jobs on a 24-hour rota. They attend incidents in and around Goring, Woodcote and Whitchurch such as strokes, cardiac arrests, falls, drownings and people sufferging head injuries, breathing difficulties and other crises.

They are often the first on the scene to provide life-saving care until paramedics can take over.

The responders launched an appeal for the 4x4 two years ago and it was kickstarted by a £20,000 grant from power company SSE.

The remaining money came from donations and businesses including Virgo Beauty and Warmingham estate agents in Goring high street, the Catherine Wheel and John Barleycorn pubs and Barbara’s antiques shop off Station Road as well as Cleeve-by-Goring WI.

The ambulance service also made a contribution.

Co-ordinator Teresa Blay said: “The vehicle will make a difference because people will see us coming and pull out of our way, whereas in our own cars we’re more likely to get stuck behind someone while trying to get to an incident.

“The alley lights are very helpful because it can be difficult finding a property by GPS alone. They will also make it easier to spot patients who may have collapsed at the roadside. We’re very appreciative of the community’s contributions towards this — we’ve always enjoyed fantastic support and people say they’re pleased to see us reach our target.

“After two years of fundraising, it’s nice for them to see that their money has gone to good use. It’s something which will benefit the community on a regular basis.

“Everyone appreciates what we do because we can be at the scene in as little as a minute when the nearest ambulance might be 10 or more minutes away.”

The responders have kept going throughout the coronavirus crisis.

Ms Blay said: “We haven’t stopped, although it’s been quieter than usual, particularly during the early days of the outbreak when people were worried about going to hospital because they didn’t know what the risks were. That meant we were only seeing the really serious cases whereas usually we’d get the full range, including some less urgent incidents.

“We’ve all been fine —  we didn’t really think about the risk and just got on with what needed to be done.”

The other responders are Nikki Swan, Ashley Smith, Melanie Meads and Su Absolom, whose husband Sean is watch manager at Goring fire station.

The group relies on donations to continue. To make a donation, visit  www.sca-charity.org.uk/donate

For anyone wanting to become a community first responder, training is provided but currently only a limited number of candidates can be accepted. For more information, visit www.scas.nhs.uk