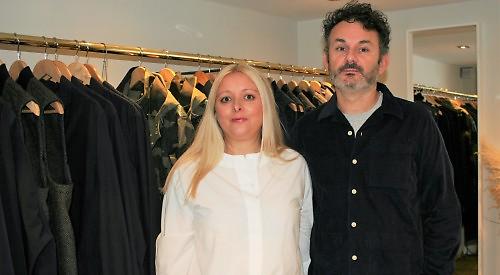 A CLOTHES designer who helped create the costumes for the Kingsman films [read all about their experiences in our story here] has opened a menswear shop in Goring.

Adam Cameron is running The Workers Club at the former Faulkner and Wells gift and homeware store in High Street with his wife Charlotte.

The couple, both 43, have more than 30 years’ experience in the fashion world between them.

They previously supplied socks and hats to the old store and spotted an opportunity when owner Tiyah Hernandez Pierrepont closed it in order to trade online only.

The Camerons are selling a range of smart-casual tops, trousers, coats, jackets and accessories, which they mostly designed themselves.

They have been running the business online since 2015 but wanted to have a physical outlet.

The couple met at the University of Derby, where they both studied fashion, and had always wanted to run their own business but decided to get more design experience in the industry first.

Mr Cameron worked for luxury brands including Burberry, Daks and Dunhill, while his wife was employed by the Arcadia group, which owns Burton, Dorothy Perkins and Topshop, among others.

The couple, who married in 2012 and have two children, sell a limited range because they wanted to avoid the “fast fashion” model of the big chains which constantly release new lines at low prices so that customers keep buying.

The issue has become more high-profile after a number of documentaries highlighted the environmental damage caused by the practice as well as the exploitation and deaths of workers in developing countries.

Mr Cameron said The Workers Club was proving to be popular despite the economy still recovering from the impact of the coronavirus lockdown. It was also attracting female shoppers so the shop could start stocking women’s items as well.

He said: “We were sad that Faulkner and Wells left but it offered a rare opportunity because units don’t often come up in Goring. When they do, they are occupied pretty quickly.

“This village is a premium location, which we had been looking at for some time.

“People have been very encouraging and say it’s refreshing to see a shop open in these times, even if they think we’re a bit crazy for doing it. It’s surprising how excited they’ve been and we feel very welcome.

“We’re an antidote to the fast-paced, high-waste model — we launched with the motto ‘Buy less, but better’ and only had one item rather than starting a whole line, then getting rid of it or discounting to start again with another line.

“There has been a big move towards that as people are realising they should make more informed purchases. It’s becoming more popular because it’s the right thing to do. We’d rather sell a more expensive coat that will last 10 years than have people buy 10 cheaper coats that only last for one.

“There has also been a trend towards supporting local, independent businesses since the pandemic because people have seen their value and hopefully that will continue.”

Mrs Cameron said: “It’s a tough time across dozens of retail sectors but this feels like the right time for our brand and we can’t wait to settle into the village.

“Having previously been an online business, we’ve never had that face-to-face interaction before.

“It’s all about becoming part of a community and we definitely see this as a long-term venture, it’s not just a pop-up shop.”

Faulkner and Wells opened in 2018, replacing the Ruby Pepper womenswear shop, which closed earlier that year following a pipe burst which flooded the premises.