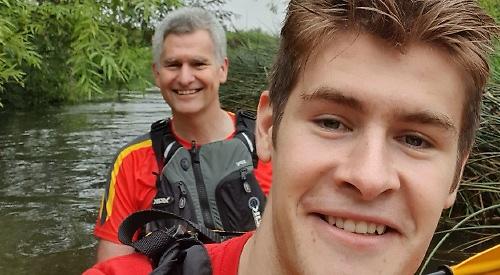 TWO firefighters raised more than £2,200 for charity by kayaking 135 miles down the River Thames.

Keith Avery, 50, and his son Sebastian, 21, of Clevemede, Goring, completed the six-day challenge from Cricklade to Teddington in aid of the Fire Fighters Charity and the Thames Valley Air Ambulance.

The pair are on-call firefighters at the village fire station in Icknield Road and wanted to support causes which have struggled to raise funds due to restrictions on public events during the coronavirus pandemic.

They travelled in a two-man kayak the full length of the non-tidal Thames by paddling about nine hours a day, periodically climbing out of the river to carry their vessel through more than 40 locks.

This was easier than queuing in busy river traffic to paddle through and they appreciated being able to stretch their legs.

They were accompanied in a support vehicle by Mr Avery snr’s wife Ginny, who drove them to the start of each stage and met them at the finish to take them home.

She also carried their packed lunches, which included food donated by Pierrepont’s café and the Village Café in Goring.

The men got into kayaking about a decade ago, when Sebastian enrolled on a watersports course at the Adventure Dolphin activity centre in Pangbourne, and have done it regularly ever since. They bought the kayak about three years ago.

Father and son, who both work in IT, first discussed the idea of the challenge when the lockdown was imposed in March but delayed their training until the restrictions began easing off in June.

They hadn’t previously paddled further than the Riverside Café at Benson so once they had planned their route they explored it in sections to check they were fit enough.

They trained throughout the August heatwave, when parts of the upper Thames were so low that they had to carry their kayak along the towpath. They also had to saw through overgrown tree branches and correct their course in high winds.

However, when they set off for the real thing the way was clear and the weather mostly warm and calm.

On the first day the men paddled from Cricklade to Rushey lock, near Faringdon, a distance of 20.7 miles.

At the end of the third day they were greeted at Goring lock by villagers, including Sebastian’s younger brother Ben, 15, who had gathered on the bank.

Their final destination was the Anglers pub at Teddington, which gave them each a free pint of beer. The Averys broadcast their location live via satellite so supporters could track them online and recorded the entire trip with a camera mounted on the kayak’s prow. They will use the footage to produce a time-lapse video for YouTube.

Mr Avery snr, who has been a firefighter for 13 years, said: “I turned 50 last year and I’d always wanted to celebrate by doing something special while helping charities.

“We both enjoy kayaking and sticking to the non-tidal Thames seemed manageable.

“It would have been a lot more complicated if we’d gone beyond Teddington because we’d have needed to plan it carefully around the tides.

“We’ve only done short distances before this — we’d joked about kayaking to Henley in the past and agreed it would be too far.

“We researched our launch points online and decided six days was achievable because it was just the two of us.

“One of the hardest things was the sheer amount of sitting down. Walking through the locks was a good way to get the blood flowing again and much faster than queuing.

“Psychologically, it was tougher once we’d passed Goring. Every stroke in the first few days was taking us closer to home but after that we were getting further away and it became a lot more built-up and less scenic.

“Ginny did an amazing job with the driving and we’re really grateful. We considered camping every night as it could have been fun but it would also have been an added complication, especially with so many sites closed because of coronavirus.

“It was nice to come home every night and recharge all our devices — I stayed up until 11pm or so while Sebastian would go straight to bed.

“As the week went on, it became harder to wake up and know there was another day’s kayaking ahead.

“We got soaked by rain on the fourth day but luckily the weather cleared up so we dried off before the evening. It would have been miserable loading up our kayaks with wet clothes and the sunlight fading.

“It was amazing to finish. We’d always talked about doing ‘this bit’ or ‘that bit’ of the Thames but now we’ve done it all in one go.

“Ginny has joked that we should do the same route upstream but that would take a good deal more than six days.

“We were astonished at how much we raised as we only expected to make a few hundred pounds.

“Ginny worked so hard to publicise our adventure and our supporters have been so generous.

“It was brilliant to be able to do it with Seb — we were chatting all along the way and never got bored.

“However, between the training and our fire service commitments, we wound up spending a lot of time together and now he wants a bit more ‘Mum time’.”