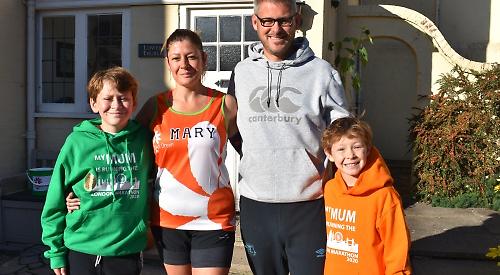 THE owner of a Goring pub and restaurant is to take part in the “virtual” Virgin Money London Marathon on Sunday.

Mary Galer, who runs the Miller of Mansfield in High Street with her husband Nick, was due to compete in the actual event in April but it was called off due to the coronavirus pandemic.

She was devastated because she had secured a late place and spent three months training almost from scratch to get fit enough.

When the online race was announced, she signed up and went back to running three times a week once the lockdown ended, gradually increasing her distances.

On Sunday, Mrs Galer will be monitored by an official smartphone app as she runs two laps of a circuit passing through Moulsford, Cholsey, North and South Stoke and Goring in order to complete the required 26.2 miles.

Her husband and children, Elliot, 11, and Monty, seven, will be among supporters cheering her on and providing refreshments while friends will run or cycle alongside her. She will be filmed from a drone.

Mrs Galer hopes to raise £3,000 for Daisy’s Dream, a Twyford charity which supports children and families through bereavement, and has already raised more than £2,300.

She said: “I’m feeling quite emotional because I’ve always wanted to do this — it’s definitely one for the bucket list.

“Running for such a worthwhile charity means a lot and I hope it will inspire the children to enjoy exercise and show them what you can achieve with the right effort.”

Mrs Galer is a keen runner and regularly enters the Goring 10km, which is sponsored by her business.

During the 2017 Pangbourne 10km she was stung 12 times after disturbing a nest of hornets in a patch of woodland.

Mrs Galer was taken to the Royal Berkshire Hospital suffering anaphylactic shock and was given emergency treatment. She still wanted to do a marathon so she asked her friend Iestyn Llewellyn, who has links with Daisy’s Dream, to help her get a charity place in the London event.

Her application was initially rejected but she was accepted in February after another runner pulled out due to injury.

Mrs Galer was keen to take part as the finishers’ medals are engraved with the number 40 to mark the event’s anniversary as well as her age this year..

She said: “With my 40th birthday and the 40th anniversary coinciding, it was a real once-in-a-lifetime opportunity.

“I was gutted when they cancelled because I’d found my pace more or less. I was eating properly, I’d cut right back on alcohol and was fitting training around the business and looking after the children.”

Mrs Galer didn’t run during the lockdown because she and her husband were teaching their boys at home as schools were closed. She stayed fit by playing football and cricket with the family in the back garden. Afterwards, she returned to running and would cycle on other days.

Mrs Galer said: “I think my family has been quietly impressed and certainly very supportive. Nick has been incredible and I could not have done it without him as it takes so much time out of the day.

“Our customers have been encouraging too. I always get asked how I’m doing and I’ve put out a donation jar with a magnum for whoever makes the closest guess to my finish time.

“I’m nervous but excited and I do have a time in mind but you never know what’s going to happen on the day. It’s not like the real thing with all the crowds cheering you on. Just finishing it will be brilliant.”