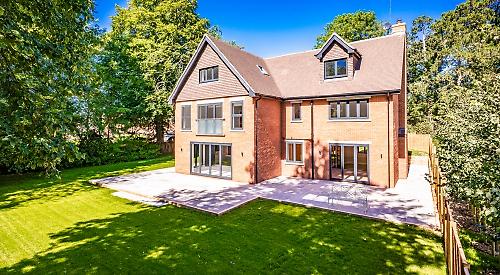 THE former chief operating officer of HMV has built a house on his former allotment in Goring.

Brian McLaughlin and his wife Sue had been inundated with approaches from developers wanting to buy the land next door to their own home in Icknield Road.

But after taking some advice the couple decided to develop the land themselves with the intention of selling to help their children and grandchildren up the property ladder.

Mr McLaughlin, 71, said: “We have been in Goring for about 11 years, having previously lived in Pangbourne and Whitchurch.

“When we bought this house it came with a parcel of land which we originally used as an allotment, which certainly kept us fed through the summer.

“We found ourselves getting numerous calls and letters from developers asking us to sell it to them, which was something that my wife of I never gave any thought to.

“I then spoke to Warmingham’s, my local estate agent, and they said that they [developers] would keep coming after it and that someone could build a very big house on it.

“We talked about it — it is in a nice position in a really nice part of Goring — and if anyone was going to do it, why not ourselves?” The couple employed an architect, builder and project manager and having set a budget, construction began in May last year and Icknield Lodge took about a year to complete.

Mr McLaughlin said: “We didn’t have a set plan or preference on the number of bedrooms. The architect showed us some initial drawings and we agreed to do it.

“We were recommended a builder and we came to him with a budget and then it all began. But it is not until things start going up that you realise just how complex a process building a house is

“People who have seen the end result have asked us what it is like living through the construction and while we were a bit apprehensive at the beginning, I would do it all again.

“It was a really good project to do and we were lucky that we surrounded ourselves with the right kind of people.”

Mr McLaughlin said: “The house sits among the most beautiful trees in just under an acre of land, it is very much the case that the grounds are deserving of the house.

“Inside, I think most people, like our family and friends who have seen it, will be overwhelmed by the kitchen which is state-of-the-art and open-plan.

“The room will end up being the hub of the home as it is big enough to have a huge dining table, sofas and a television. It is my favourite room in the house.” Leading from the entrance hall there is a drawing room with a wood-burning stove and bi-fold doors that open out on to the garden and terrace. There is also a study and a sitting room on the ground floor.

On the first floor there is the master bedroom and second bedroom, both en-suite, two further bedrooms and a family bathroom.

On the second floor there is a fifth bedroom, with en-suite, and a studio which can also be used as a sixth bedroom.

Mr McLaughlin said the house would offer flexible living space and would be ideal for a family.

He said: “While there are six bedrooms in total, it is a flexible space. You could turn the sixth room into a cinema room or a games room — it would fit a snooker table — or you could have it as a separate annexe for relatives or an au pair.

“Architecturally speaking the house is fantastic. The rooms are very bright with natural light from large windows and the bedrooms stem from a fairly confined landing so you don’t get lost finding the rooms and you don’t get an overbearing feeling, even though you are living in a large house.

“It also has an integrated sound system which, having worked in the music industry before retiring, I wish I had in our house.”

Icknield Lodge backs on to farmland and is a short walk away from the River Thames, high street shops, village primary school and mainline railway station.

Access to the property is through electric wrought iron gates and the new home comes with a 10-year building warranty.

Mr McLaughlin wouldn’t reveal the cost of the project but said it should be a “profitable project”.

He added: “It is not easy for families to get on the housing ladder and selling the property will provide some comfort for our children and grandchildren.”