Hairdresser takes over his mother’s salon at age 22 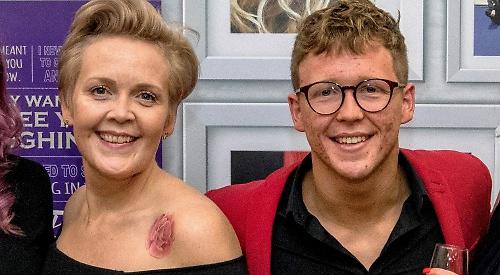 A HAIRDRESSER has taken over his mother’s salon in Goring.

Luke Hawkins is the new owner of the Marvellous Hair Company in High Street, which he plans to rename Luke Robert Hair after his first and middle names.

The 22-year-old began working at the unisex studio when his mother Lorraine opened it in 2016 at The Arcade. It moved to the former Swift Office Stuff unit last year.

The pair had always agreed that he would eventually take charge but didn’t expect it to happen so soon. However, Mr Hawkins says he felt ready after a series of professional accomplishments. In 2017 he was one of only eight UK stylists to win a place on a Fellowship of British Hairdressing training programme and earlier this year he was appointed a guest stylist for hair product firms Goldwell and KMS.

He has redecorated the premises and is using more environmentally friendly products.

He hopes to expand his team of six stylists and would like to eventually open more branches and launch a training academy.

Mr Hawkins said: “Basically, I’ve been running the place for some time and the transition happened very naturally as I am older and Mum felt the time was right to step down. It’s a very exciting time.

“I’m not worried about the impact of coronavirus because this is something I’ve always wanted to do and our customers have been very loyal throughout.

“It’s a difficult market but you’re either going to sink or swim and I’m just going to keep on pushing forward. I’m lucky to have a very skilled and driven team so I’m feeling very confident and loving it so far.”

Mr Hawkins lives in South Stoke with his mother, father Roger, a painter and decorator, and older brother Charlie. He started his career as an apprentice at the Marc Antoni salon in Hart Street, Henley, when he was 14 and he was still a pupil at Langtree School in Woodcote.

He then studied for an NVQ in hairdressing at The Henley College. where he now teaches in his spare time. He then started working for his mother.

Mrs Hawkins will continue working at the new salon in an administrative role.

“My dad and brother are very proud too,” said Mr Hawkins. “Dad has given a lot of help and it’s a real family venture.”