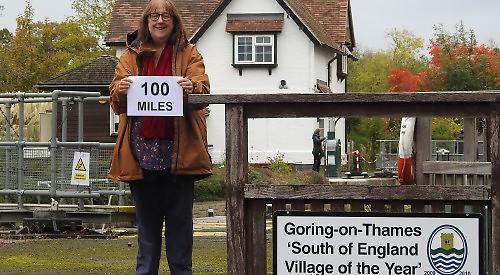 A WOMAN who goes walking for health reasons has completed one-fifth of the distance from Land’s End to John O’Groats for charity.

Karen Wiles, whose Dutch barge Edith is moored on the River Thames at Goring for the winter, began the 847-mile challenge on September 28 and aims to finish in a year.

So far, she has walked more than 150 miles and raised £660 for the Thames Valley Air Ambulance.

The 59-year-old, who lives on the boat with her husband Bret, walks in the countryside and on different sections of the Thames towpath and records her daily mileage using an app. The charity has given her a fluorescent tabard advertising her challenge to people she meets en route.

Mrs Wiles, a retired IT professional, must walk two-and-a-half miles daily to reach her goal but is currently averaging more than that, which will allow her to have some days off.

She said: “It’s going really well — the weather’s getting wetter and colder but I’m completely waterproof and get so warm when I walk that I often strip layers off.

“Bret comes with me on the shorter walks but he’s had a hip replacement so he can’t go too far. He has been very supportive and I appreciate him doing what he can.

“As winter comes in, I’ve been steering away from the areas where I know it’ll be muddy and boggy so there have been a few more roadside walks than in the early stages.

“A lot of it has been around Goring and Streatley, though I’m driving further out too.

“I’m well equipped for the next few months and will keep going every day as long as it isn’t too bad, even on Christmas Day, but I have to admit I’m really looking forward to the spring.

“I’ve still got a long way to go but I’m very happy with the progress I’ve made so far and glad to have a few days off in hand.”

Mrs Wiles was morbidly obese at the start of the first coronavirus lockdown in March but lost weight after joining a Slimming World group which encouraged her to change her diet and slowly build up to walking 10,000 steps, or about five miles, per day.

She and her husband have lived on the river since 2005 and moor in various locations, mostly between Henley and Goring.

If you would like to sponsor her, visit www.justgiving.com/
fundraising/karen-wiles