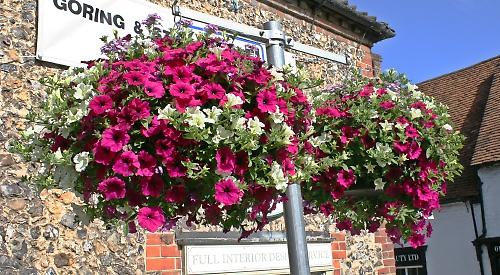 NEGOTIATIONS over the funding for Goring’s entry into next year’s Britain in Bloom competition have hit an impasse.

The volunteer committee responsible for the village’s bid is usually awarded an annual grant of up to £3,000 by the parish council to cover the cost of various projects.

However, the council will only approve next year’s application if the committee comes under its control.

The organisers have refused as they don’t want to lose their independence.

Last year, Goring won its first national gold title after a string of successes in the regional competition.

But since then the council has frozen its grants scheme to save money for causes which might need it more following the coronavirus pandemic.

It is also planning several improvement schemes, including new LED street lights costing up to £100,000.

The council also says it now struggles to get funds from South Oxfordshire District Council and other grant organisations.

The grant money would go directly to the Bloom group’s suppliers, with whom it has negotiated a discount.

But Stephanie Bridle, who chairs the group, says it won’t accept the money if it means becoming a committee of the council.

She told councillors: “We’ve been planting hanging baskets since the council was unable to find the manpower to maintain them in 2007.

“We always assumed councillors were happy with this arrangement, especially as we were regularly winning gold medals for the village for the standard of our work.

“The Bloom team voluntarily plants up the 45 baskets... and maintains them through the summer and often well into autumn by watering and feeding them three or four times a week.

“This saves the council more money than the actual cost of the plants and results in the best hanging baskets in the country, according to the Royal Horticultural Society.

Our volunteers, aged between three and over 80, aren’t taking a penny for themselves... and are net benefactors to Goring’s quality of life.

“Now we are being asked to join the council, apparently so you can all choose the plants and decide where to hang them. This feels very controlling and takes no account of our record of excellence.

“Our ability to function as we have done previously would be severely curtailed, which would make it harder to manage our work and reach the standard required for Britain in Bloom.”

Parish councillor Bryan Urbick told the Henley Standard that the council had set aside the money for beautifying the village.

“We would expect the Bloom group to become a council committee but they don’t seem to want that so we’re kind of stuck,” he said. “I don’t think it would be bad as they could still influence what is done.

“We appreciate everything they do and have frequently thanked them for their contribution so it’s a shame we’re in this position.”

If no agreement is reached by March 31, the money will go towards improving Goring’s open spaces.