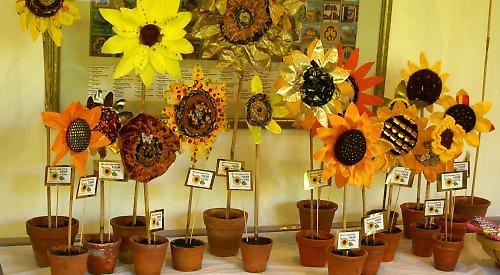 GORING could still enter this year’s Britain in Bloom competition after residents clubbed together to meet the £3,000 cost.

The volunteers responsible for the village’s annual bid had declined their usual funding from the parish council after it insisted that they form a committee under its control.

Instead, they raised the funds for various planting projects through an appeal in the Goring Gap News magazine, which hit its target within 24 hours.

However, now they must resolve a legal dispute with the council before they can beautify the village over the summer.

The council, which owns Goring’s lamp posts, wants the volunteers to sign an agreement establishing who is liable in the event of damage or injury when dozens of floral baskets are hung from them.

It says this is a standard contract, similar to the agreement for renting the village hall, but the volunteers are against signing it because they have not had to do so previously.

They have agreed to further talks after the council offered to negotiate the wording.

The Bloom team has been putting up baskets for more than a decade and has won a national gold award and recognition as the best small town in Britain since it first entered the Royal Horticultural Society competition in 2012. It has also won several gold and silver gilt titles in the “small town” category of the Thames and Chilterns region.

When members last sought funding from the council, they were told that it had stopped giving grants because it might need more funds to support the community during the coronavirus pandemic.

It offered to recognise the volunteers as a committee, which would release the money, but they said they had to stay independent in order to be able to work with other public bodies.

Following the volunteers’ public appeal in December, the organisers received a “substantial” donation from an anonymous supporter and numerous smaller ones.

Stephanie Bridle, who chairs the Goring Gap in Bloom committee, told a parish council meeting last week that she was concerned about the contract because it could make the group liable for certain incidents.

She said: “It feels more like something you’d apply to an employee, not a group of volunteers. It needs to be a two-way arrangement which takes our needs into account.

“We would prefer to proceed as we’ve done for many years without accident or incident. We’re fully insured and conduct a risk assessment but it appears we’re not being trusted to do our job as usual.

“May I suggest that this contract isn’t necessary? It’s demotivating for our volunteers and is asking us to go further than we were expecting. We can assure you that what we do is right and proper.”

Councillors said the agreement was necessary and if the Bloom committee was ever held at fault for an incident it could claim from its liability insurance.

Councillor Bryan Urbick said: “Thankfully there have been no accidents but most people [sign] all the time and we can show them a draft.”

Council chairman Kevin Bulmer said: “Just because something hasn’t happened, it doesn’t mean that it won’t. You don’t get any ‘points’ taken off in court for being a volunteer body, as nice as that might be.”

Councillor Lawrie Reavill said the council was risking its reputation by coming into conflict with the Bloom team, which pulled out of the competition some years ago in another disagreement over funding.

He said: “This is a very important issue. The community is beginning to learn of these disagreements and it’s damaging to the whole concept of volunteering and helping the community.

“Frankly, it’s also becoming damaging to the council and we’re becoming very unpopular. We have a problem on our hands and we need to resolve it.”

Cllr Bulmer replied: “We can adapt [the agreement] but… it takes two to tango. It’s regrettable that we’ve ended up where we are but we should be able to move forward fairly quickly, and with goodwill on both sides, as long as people are willing to move from certain positions.”

After the meeting, Mrs Bridle said: “It was very encouraging to get the money from supporters so quickly after our appeal and I do hope we’re able to continue moving forward and don’t have to give it back. We had so many offers that we started turning them down as it was too much.

“The agreement was presented to us with no notice and we have concerns after having it checked by someone with legal knowledge.

“We’re willing to talk about the wording but it would have to be rewritten pretty extensively before we’d be happy.”

The council has earmarked the £3,000 that could have gone to the Bloom committee for improvement of its green spaces.

After winning at national level in 2019, Goring couldn’t enter the competition last year because of the pandemic.