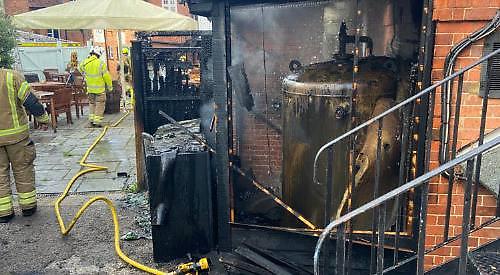 A RESTAURANT and hotel in Goring is gearing up to relaunch after undergoing £42,000 in repairs following a fire.

The Miller of Mansfield is set to open with an outdoor service only on Wednesday, April 14, when this will be allowed under coronavirus restrictions.

Owners Nick and Mary Galer hope residents will show their support for the business following the blaze in October.

The fire broke out inside a tumble dryer in an outhouse behind the main building. Staff quickly spotted it and called 999 before evacuating guests.

Four fire crews were on the scene within minutes and later told the Galers that they narrowly prevented the building from burning down.

The couple, who live nearby, have had to refurbish the smoke-damaged kitchen and several bedrooms and install a new fire alarm.

They have also installed a new water tank and replaced a large amount of stock which was destroyed. They will be able to claim back all the costs from their insurer.

Staff will return about two weeks before the re-opening for refresher training and the Galers hope the indoor seating area will re-open with social distancing soon after this is permitted on May 17.

Mrs Galer said: “Things are much better now that the damaged bits have been replaced, tidied and cleaned. We’re ready to go as soon as the rules allow.

“There are still a lot of unknowns but we’re trying to be positive as we’ve had massive support from our customers and hope that will be shown as we re-open.

“The weather is improving and everyone’s keen to get back to some kind of normality so, despite a very traumatic few months, we should end up in a good position.

“We’ve had a lot of encouraging messages — people say they can’t wait to come back and are even asking to make bookings before we’ve opened.

“I’ve had to open a little spreadsheet just to keep track of demand.

“It has been a hard time for everyone and lots of places have shut down so we feel very lucky that we’ve still got a thriving business to come back to.”

Meanwhile, the Miller of Mansfield has retained its listing in the 2021 Michelin Guide.

Mrs Galer said: “That was very exciting and shows there’s still an appetite for quality food which we’ve always worked hard to deliver.”