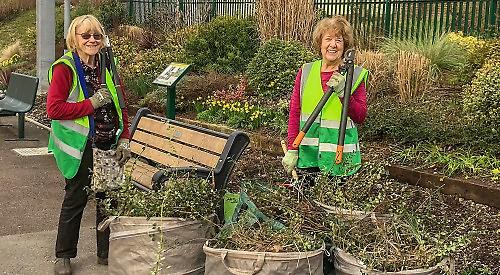 FLORAL hanging baskets will go up around Goring this summer after a deal was agreed between the parish council and the volunteers responsible for the scheme.

The Goring Gap in Bloom team has decorated the village most years since 2007 and won numerous awards in the Royal Horticultural Society’s Britain in Bloom competition, including best small town in the country in 2019.

The volunteers weren’t going to do anything this year following disagreements with the council, which typically provides funding and also owns the street lights which the baskets are attached to.

However, the two sides have reached a compromise so next month the bloom team will plant up dozens of baskets at the home of chairwoman Stephanie Bridle for hanging up in June.

The volunteers are yet to decide whether they will enter the small town category of the Thames and Chilterns regional competition in which Goring has won gold and silver gilt awards previously.

This year, the contest will involve presenting photographs online rather than hosting a visit by judges because of the coronavirus pandemic Last year, it was cancelled.

The parish council usually gives the bloom committee up to £3,000 but declined a request for funding in November, saying it had stopped giving grants because it might need more funds to support the community during the pandemic.

It said it was struggling to obtain grants from larger bodies such as South Oxfordshire District Council, which said the parish council didn’t need the money if it could afford to give grants in turn.

Instead, the council suggested that the bloom team should becomes a committee of the council, which it could fund.

However, the volunteers rejected this idea, saying they had to stay independent in order to work with other public bodies, such as Network Rail.

They then raised the money through an appeal in the Goring Gap News magazine, which hit its target within 24 hours thanks to several large donations from anonymous supporters.

The council responded by asking Mrs Bridle to sign a contract agreeing that the bloom team was liable for any damage or injury during the period that the baskets were hung from the lamp posts.

It said this was to protect its legal position and was standard practice.

The committee refused, saying it hadn’t been asked to agree this in previous years.

Now Mrs Bridle has accepted a proposal by the council for the bloom committee to “loan” its baskets to the council for a nominal sum so that they will be covered by its insurance.

The arrangement is for this year only and the council insists a more permanent solution is still needed.

Mrs Bridle said: “It has been a grim few months but a simple alternative has been agreed which offers the right level of protection to the public. It’s just a shame it couldn’t have been proposed in the first place.

“We’re going to put all our energy into making the village lovely this year and would like to enter Thames and Chilterns in Bloom as they’ve given us so much support and we’re a good example of what can be achieved.” The volunteers can’t stage full working parties under the social distancing regulations but can go out in smaller groups.

They have already trimmed and tidied up their planting at the village station, filling eight garden waste bags.

They also planted new crocuses on platform 1 in support of Rotary International’s Purple4Polio campaign, which aims to eradicate the disease in the developing world through immunisation.

The volunteers aren’t planning a major project but are considering making more improvements at the BT exchange building, off Station Road, where they planted a wildflower meadow a few years ago.

They will not hold their annual fundraising plant sale next month but hope to get together at a private party in the summer if the rules allow.

Mrs Bridle said: “We’re so thankful to everyone who gave money when we needed it and I’m so glad that we will be able to reward that through our work instead of having to pay it back.”

She is hoping to persuade the council to set up a permanent budget for floral displays for when she and her colleagues are eventually unable to carry on due to age.

“We won’t have more discussions until the autumn but it would be nice to have some kind of legacy because the village really appreciates what we do,” said Mrs Bridle.

“Just the other day, someone approached me in the street and asked to be put down as a volunteer so there’s lots of enthusiasm. We don’t even need to ‘market’ bloom because it speaks for itself.

“We never set out to become national champions and, in fact, only took this on because the parish council at that time were struggling to do it themselves. However, we’d like to think it will continue when we can’t. The council could order from a supplier rather than making the baskets themselves.

“Not that we’re thinking of retiring any time soon — I won’t even allow that word to be mentioned.”

The council has earmarked the £3,000 that would have gone to the committee for the improvement of its five green spaces.

It has appointed a landscape architect who will propose a strategy for improving Gardiner, Sheepcot and Bourdillon recreation grounds as well as Rectory Garden off High Street and the riverside green off Ferry Lane.

Some money will also go towards replacing Goring’s 212 street lamps with LED lighting, which is more environmentally friendly than the existing incandescent bulbs, which are no longer made.

Councillor Bryan Urbick, who negotiated with the committee, said: “It was never our intention to ‘take over’ what they do and they could still operate independently while sitting as part of the council.

“This is only a temporary solution and our view remains that a separate hanging baskets committee makes sense. They want to guarantee its future and that seems the perfect way to go about it.

“It isn’t an unusual way of doing things and nor was seeking a liability agreement on the lampposts. It has only taken this long to reach an agreement as we didn’t realise they wouldn’t accept these.

“We’re very positive about the bloom committee and grateful for everything they do so we hope to find a constructive way forward.

“We’re also very excited about our own green spaces programme, which we’ll be announcing in a few weeks’ time.”