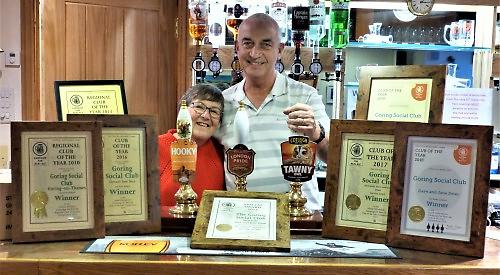 THE steward of Goring Social Club has stepped down after almost three decades.

David Dean, who took on the role with his wife Jane in 1992, said he had enjoyed being at the heart of the community but needed a change and he is now working as a gardener.

The couple lived at the club in High Street and ran it jointly until 2018, when Mrs Dean stepped down to become a carer at the Cleeve Lodge care home in the village.

Over the years, they won numerous awards from the Campaign for Real Ale for the wide range of beers they offered. They typically offered two with a third “guest” ale that was changed frequently.

The club’s management committee, which is now redecorating the premises while seeking a new steward, has thanked the couple for their service and will organise a farewell celebration when the coronavirus restrictions allow.

The Deans, who now live around the corner in Wallingford Road, have been married for 34 years and have two grown-up children, Karl and Lindsey.

They grew up and met in west London and had managed a number of licensed premises when they applied for the Goring vacancy. They wanted a gentler pace of life and only planned to stay for a few years before taking on a pub.

However, they remained because they enjoyed it so much and didn’t want to move away while their children were still at school.

Mr Dean, 63, said: “Everything fell together with the social club because we wanted somewhere to live and had the chance to move to this beautiful village, so it was the obvious choice.

“We settled in really quickly and soon got used to the slower way of doing things. The club didn’t need much in the way of change, just someone with a bit more enthusiasm as the previous steward was feeling ready to step down.

“It just became a way of life — we lived on the premises, didn’t have to travel to work and didn’t have to worry about what the weather was like. It’s very different from pubs, which anybody can walk in and out of — this was more like being part of a big family where everybody gets to know each other.

“It was always lovely to see regulars’ children grow up. One moment there’d be a little girl sat having a Coke and some crisps with her parents, then before you know it she’s coming in with her own kids who are doing the same thing.”

He said he and his wife, 61, who regularly provided catering at club events, were proud of their awards.

“We were a free house and loved being able to bring in beers from anywhere in the country,” he explained. “We kept all the pump clips on the wall and removed hundreds when we were packing up. I wish I’d taken a photo.

“There’s nothing better than getting praise for a nice pint. Very occasionally there’d be a problem but you’d just apologise and explain it was nearing the end of the barrel or whatever.”

The Deans witnessed many changes over time, including a shift from a mostly male membership to more families and the introduction of the indoor smoking ban in 2004. Spirits became less popular, with customers consuming a total of about 150 large bottles annually in the Nineties compared with four today.

Mr Dean said he would remain a member of the club and visit regularly.

He said: “I felt a bit stuck in a rut and should probably have packed it in 10 years ago. It has been a brilliant 29 years but some people on our committee were probably wondering how I put up with it for so long.

“It’s a chance for them to have a fresh start — a new look and a new steward at the same time.”

Keith Grant, a member of the committee, said: “Dave and Jane represented the face of Goring Social Club for a generation of members and presided over a period of considerable change in both the club and the trade in general.

“Before their arrival, the club had experienced difficulties with the quality of its stewards. They provided much-needed stability and always showed honesty and integrity in undertaking their duties.

“It is a pity that they leave without due recognition in this quiet, uncertain period of the covid-19 pandemic but I’m sure members will offer thanks and best wishes as normal times resume.”